The Hodgepodge of Country Stuff is a weekly column where I discuss some country stuff, non-country stuff and maybe even stuff in-between. So that’s a lot of stuff! I’m sure you’ll find some stuff you even like. So welcome!

Over the past few years country music has been dominated by a sub-genre called bro country. If you’re a music fan who hasn’t been living under a rock, you’re well aware (even non-country fans). It was coined by writer Jody Rosen and it refers to party songs that rely on the same old tropes of drinking, trucks, tailgates, river banks, moonlight, fields and most of the time involves a bro trying to get some sex from a girl. Most of the time the “girls” in these songs (they’re never called women) are treated like crap and are referred to in a derogatory manner. Bro country been the bane of existence for traditional country fans. It’s dominated radios, charts and in my opinion dragged the good name of country through the mud several times.

Those days are coming to an end. Bro country is on it’s very last legs and is no longer the popular taste of the month in country music. Sure there are a few songs of this nature on the charts and playing on radio, but they aren’t as widespread as before. Now just because bro country is on its death bed doesn’t mean it’s not going to fight until the end. The artists who have gained the most from it will fight tooth and nail to keep it alive. I’m looking at you Florida Georgia Line, Luke Bryan, Chase Rice and Jason Aldean. To me the final litmus test for this will be Luke Bryan’s new album later this year. Will it feature a lot of bro country and if so will it be popular? We’ll have to wait and see.

On top of this a lot of bro country is being replaced by quality music. Tim McGraw finally woke up and realized trying to keep up with the bros wasn’t going to fly with his fans and went back to his old late 90s and early 2000s sound. It’s paid dividends as “Meanwhile Back at Mama’s” and “Shotgun Rider” both became #1 songs. He also netted a Grammy nomination for Best Country Song. Maddie & Tae’s debut EP was a nice sample of traditional country music and continue to gain more popularity. Carrie Underwood’s “Something in the Water” has been a hugely popular songs on the Billboard and iTunes charts. Mickey Guyton has caught everyone’s attention early in 2015 with her country waltz single “Better Than You Left Me.” Even Jake Owen, who benefitted greatly from the bro country fad, put out a great single in “What We Ain’t Got.” On top of this Sturgill Simpson signed with major label Atlantic Records recently.

Things are going great for traditional country fans, right? Well there’s one big elephant in the room you’re kind of forgetting. While a good bit of bro country has been replaced by more quality country songs, the rest has been replaced with something arguably worse. I’m of course referring to Sam Hunt. While independent country fans point to the aforementioned Simpson’s meteoric rise in the last year, mainstream country fans will point to Hunt’s own impressive rise. Last year at this time hardly anyone knew Sam Hunt. He was just another songwriter in Nashville. Then his single “Leave The Night On” came out and became a huge hit. I hoped he was just a flash in the pan and just a one-hit wonder. But at the same time I knew this was naive. When something shows any success in country music, everyone else will rush to copy it and ride the trend.

Jason Aldean surely did as his single “Burnin’ It Down” became one of the biggest hits of 2014. Half of his album featured EDM and heavy pop influences similar to Hunt’s album. I can say the same of Chase Rice and Florida Georgie Line’s albums. Meanwhile Sam Hunt has four songs in the top 40 of iTunes. That’s insane. Each song is also a straight pop song and people are eating it right up. What’s the deal? Well last week I really explored the review sections on Sam Hunt’s Montevallo album and there was a comment I saw a lot that stood out to me. “I usually hate country music, but I love this album and Hunt’s music.” In other words, they like this country music because it isn’t country music. But I would be remiss if I didn’t mention that Sturgill Simpson gets the same exact comment from people and has said as much in interviews. Another similarity both Hunt and Simpson share is they get showers of love from the critics.

So what we got here are two completely different artists with completely different music with both sides claiming it’s country music. It’s truly a sight to behold. Country music is in a war right now. In one corner you have the bro country fans touting the success of Florida Georgia Line and have a legitimate claim. Then you have the traditional country fans who can preach the success of Sturgill Simpson. And of course the pop/EDM country fans who have their poster-boy Sam Hunt. All are having success and gaining more fans by the day.

So you’re probably wondering who’s going to win? Well right now all of them. In the future, all of them can win too. Remember the splitting of country music is coming. It’s pretty much inevitable because I find it impossible to have all of these different sounding acts under one genre. The fans and critics can’t stand it. The labels know there’s money in a split too. But there’s one thing I do disagree with about this whole split. Everyone says it will simply split into two parts, but I find that to be unbelievable. There isn’t a lot of crossover between Sam Hunt fans and Luke Bryan fans. There are many on each side that despise the other. Go read message boards and comments sections. Country music is going to split into multiple sub-genres similar to rock music. You could conceivably have traditional country, rock country, pop country, bro country, EDM country, hip-hop country and even more.

This could be a good thing. No more quarreling amongst opposing fans of what is and isn’t country music. A possibility of a fair platform for all artists of all kinds. This could also be a bad thing. Look at how divided rock music is with its hundreds of sub-genres and it’s presence in the mainstream. It’s an absolute mess and country music could end up in the same boat. I have no idea what’s going to happen, but everyone will have a side in this fight. I know one thing for certain: It’s going to be entertaining. So grab your popcorn and get ready. Also go traditional country!

Brad Paisley, George Jones and Bill Anderson – “Too Country.” One of the many great songs off of Brad Paisley’s Part II album. Nothing would please me more if did another album like this one. My other favorite from that album is his cover of “You’ll Never Leave Harlan Alive.” It’s kind of funny looking back at this now after his latest album.

My Non-Country Song of the Week

Fall Out Boy – “Uma Thurman.” Yeah yeah I know it’s a mindless pop song, but sometimes I like to take a break from the more substantial stuff and listen to something upbeat. In my opinion, Fall Out Boy used to be a pretty good band. Their quality lately however has slipped and there are several bad tracks on their new album. But “Uma Thurman” works for me and I’m a sucker for a song that samples The Munsters’ theme song.

Tom Petty sues Sam Smith for copyright infringement. Would anybody say he is, in fact, being petty?

The Brothers Osborne are definitely one of the most underrated follows on country music Twitter. And this tweet is proof.

A Google Play Review That Will Make You Face Palm 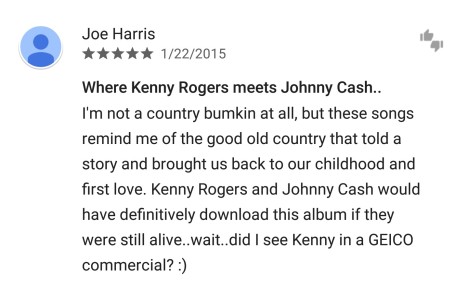 This was left under RaeLynn’s Me EP on Google Play. I shit you not. I think this wins the prize for most ridiculous review to date.

17 thoughts on “Hodgepodge of Country Stuff: Bro Country is Fading, Sam Hunt is Rising & Country Music is Shattering Into Pieces”