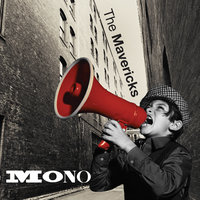 When I first heard of The Mavericks in 2013 and listened to their album In Time, I was simply amazed. This band, made up of Raul Malo, Eddie Perez, Paul Deakin and Jerry Dale McFadden, just blew me away with their amount of talent and skills. To me it was without a doubt the best country album of 2013. Remember this was the same year Jason Isbell’s own comeback album Southeastern, along with Sturgill Simpson’s solo debut High Top Mountain came out too. I listened to In Time for months on end, not something I do with just any album. In the back of my head I wondered how they could follow-up such a great album. Then it leaked in August 2014 they were coming out with a new album in February 2015 and I’ve been dying to hear it ever since. Well Mono is now here. And I’ll just tell you right up front: they delivered again.

The Mavericks open Mono in one of the most ear-catching ways possible with “All Night Long.” Their brand of Cuban country with Tex Mex influences is front and center. This is a sultry, love song that makes you want to get up and dance. The rhythm of this song is absolutely infectious and nearly impossible not to get stuck in your head. It’s a fantastic song to open the album. Next lead singer Raul Malo’s smooth voice sings about love in “Summertime (When I’m With You).” He compares his time with his love to summertime and how he would brave his way through the other times of the year if he could just be with her. The saxophone play in this song is top-notch.

The group deviates away a little from their Cuban country sound to a more traditional approach in “Pardon Me.” While the accordion lingers in the background, it’s the guitar that drives the rhythm of this song. Malo’s vocals on the bridge are amazing and really give the song a climax. “What Am I Supposed To Do” is about a man questioning what he’s supposed to do without the love of his life. This is a fun love song that will make you want to sing along and just keeping hitting repeat. Again it’s a song that’s well-written, simple and makes you want to move your feet along with it.

Cuban country meets the waltz style in “Stories We Could Tell.” The horn production, piano and clapping combines to produce a beat that will mesmerize the listener. The song is about a man convincing a woman to be with him because of all the great stories they could tell. It’s another song that will make you want to dance. The Mavericks kick the tempo up a notch with “What You Do To Me.” It’s a fast-paced thriller about romance and really I don’t know what else to say. This is another song with great instrumentation and a rhythm that’s easy to love. I’m not sure how many more times I can continue to repeat how great each song is on this album.

“Let It Rain (On Me)” is just Raul Malo and an acoustic guitar playing (for the most part). Can you really ask for more? All you need to do on this song is just sit back in a comfortable chair and just marvel at the brilliance of Malo. You know what? You can just do the same thing with “The Only Question Is.” This song is a throwback to the 50s, from the horn production to Malo’s singing style. It’s a throwback song, yet feels so fresh and new. The electric guitar is great too. This song is just phenomenal in every way.

The band strays away from their usual sound and goes more toward a traditional country sound again with “Out The Door.” It’s a breakup song where the person sings about how they’re not in love anymore and how they want the other gone. But as soon as they walk out the door they’ll start crying. This is really one of the more overlooked songs on the album and yet it’s great. “(Waiting For) The World To End” is what it says it is. It’s a song about how we’re all living our lives waiting for the world to end. Who knew a song on this subject could be so upbeat and fun though? Except this song isn’t meant to be morbid and about death. It’s about how you should live life to the fullest until the end because we all meet the same fate. It’s a clever, fun song with a good message.

If you want an example of how pure Malo’s pipes are, “Fascinate Me” is the perfect choice. For those in a loving relationship, this is a song you would probably play on a romantic evening. It just oozes romance. You might melt your significant other’s heart though and might spend the rest of the night listening to The Mavericks instead of you. Hell you might do the same. The Mavericks, being as awesome as they are, decided to reward us all with the bonus track “Nitty Gritty” to conclude the album. It ends the same way it began, with their signature Cuban country sound with some rock thrown in. I don’t blame you if you don’t pay attention to the lyrics on this one, as the instrumentation is so rich and beautiful that you become enamored with it. Really it just makes you want to listen to the album over and over again.

Mono from start to finish seduces you with its sultry songs. The deeper you go into this album, the more you will love it. I thought In Time was the best this group could do, but they proved me wrong. Mono is even better than In Time, which I did not think could be possible. They have just set the bar pretty high for everyone else in country music in 2015. There’s a lot of heavy hitters yet to release their albums in 2015, but they better bring their all if they want to top this album. Without a doubt, a top contender for Country Perspective’s 2015 Album of the Year. Go buy this album and listen to it over and over. The Mavericks’ Mono is a shining example of not only how country music should be done, but really how all music should be done.

To listen to The Maverick’s Mono album, click here.