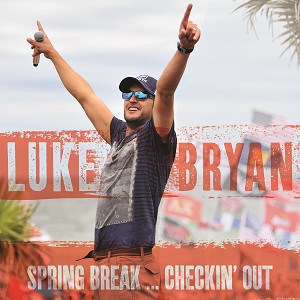 Finally! That was what I said when I saw this would be Luke Bryan’s final spring break EP. Since 2009 Bryan each year has released an EP of spring break songs that are even more awful than the songs you hear on his albums. Keep in mind all of these EPs have been released since he was in his early 30s to now when he’s in his late 30s. Also he’s a married man with two kids. So let’s get this straight: Bryan is singing songs that appeal to teenager girls (and frat boys) that could easily pass as his own kids. A married man who is a father shakes his ass on stage and sings about spring break. Creepy is the best word to describe this. So what’s the point in doing a review? Well I wanted to give this series of terrible and weird music the proper goodbye it deserves. I’m only going to review the Spring Break…Checkin’ Out EP with the five new songs, not the album with the five new songs plus the “best of” from his previous spring break albums. I don’t think I could handle reviewing more than five.

So let’s not delay this any longer and take a look at Bryan’s final spring break EP. It starts off with “My Ol’ Bronco,” which as you may guess is about an old Ford Bronco. This has to be one of the most boring songs I’ve ever heard about a vehicle. I mean it’s boring enough with the theme, but Bryan doesn’t even exhibit any charisma. This song is so bland you can’t even hate it. I’m sure the people at Ford love this and may even use it for an ad, but I just don’t see how anyone could enjoy this song. It’s going for nostalgia appeal, but it can’t even accomplish this.

The next song, “Games,” has an interesting mix of sounds. The song starts out sounding like Chase Rice’s “Ready Set Roll” and I’m preparing myself for the worst. But then that fades more throughout the song. Piano interludes then start to surface throughout the song and electric guitar play dominates the most instrumentation-wise. This song has no idea what it wants to be sonically. As for theme, it’s about a man and woman playing head games with each other. The man is with a woman a currently, but a woman from his past continues to play with his head in order to get him back. Now this actually has semblance of being a decent song, but Bryan’s immature approach prevents it from being good. The instrumentation also drowns his voice out a lot at times.

“You And The Beach” is basically a rehash of “Roller Coaster.” It has the exact same theme as it’s about leaving behind a woman the man met at a beach and is having a hard time of moving on. The instrumentation is a little livelier at least in “You And The Beach” which makes the song slightly better than “Roller Coaster.” Nevertheless it’s still a pretty generic song and it’s full of stupid clichés that have dominated Bryan’s spring break albums. Good songwriters could have crafted this into a good heartbreak song, as the instrumentation isn’t bad and Bryan’s vocals are good. The instrumentation starts out good and stays as such throughout “Checkin’ Out.” The problem arises as soon as Bryan begins to sing, as the lyrics for this song are garbage. Bryan pretty much repeats every party drinking song cliché throughout the song over and over. It’s just another mindless party song that adds nothing to the genre. I mean the instrumentation is actually there, but the lyrics are terrible and easily make this the worst song on the EP.

The final song on the EP is “Spring Breakdown,” which is basically Bryan’s farewell to his spring break EP tradition. He thanks the fans and sings about all of the good times they had with these songs. It’s a pretty generic song and will only mean something to Bryan’s fans who loved this sub par music. I will say the hook on this song is pretty damn corny as Bryan utters “I’m about to spring breakdown” over and over throughout the song. I was expecting Bryan to start producing some alligator tears at the end. So I guess people get nostalgic about drinking until they blackout and hooking up with random people at the bar? I just laughed at this song.

Luke Bryan’s Spring Break…Checkin’ Out EP wasn’t as bad as I thought it would be. It’s still bad music, but it mostly just bored me and made me roll my eyes. I’ve heard these songs so much in country music that I think my ears are numb to this type of crap. Maybe Bryan has grown up too, although I’ll believe it when I hear it in his songs. I think this spring break EP tradition is being put to a stop because Bryan and his team of writers have realized that there’s not a lot to sing about when it come to spring break and you can only rehash the same stuff for so long until even the fans you’re catering to are even bored by it. This EP will be forgotten about a month from now and I know I’ll never miss this type of yearly music released by Bryan. Spring Break…Checkin’ Out is just a giant yawn that concludes an embarrassing group of music.