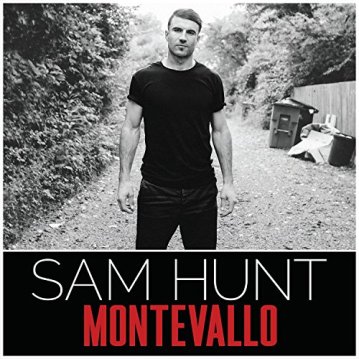 Over the past year, one artist has stood out amongst the rest in mainstream country music: Sam Hunt. Ever since “Leave The Night On” got its artificial push onto radio via On The Verge last summer, Hunt has dominated the airwaves, charts and headlines. His Montevallo album has been dominating sales, as well as receive praise from critics (a few I even respect). In fact the main subject matter of this week’s Billboard Country Update was how Sam Hunt dominated the first quarter of 2015. The aforementioned Montevallo album was the top-selling country album, with a total of 199,000 copies sold. The next highest selling album was Luke Bryan’s Spring Break…Checkin’ Out, which sold 137,000 copies. That’s a gap of 62,000 albums between Hunt and Bryan. However it should be noted the highest selling album in the first quarter of 2014, Eric Church’s The Outsiders, had a total of 491,000 copies sold.

It wasn’t just the album sales Hunt topped either. His hit single “Take Your Time” was the highest selling country digital song of the first quarter of 2015 too. A total of 619,000 copies were sold. The second-highest was Zac Brown Band’s “Homegrown,” which had a total of 381,000 sales. So Hunt sold 238,000 more copies of “Take Your Time” than Zac Brown Band’s “Homegrown.” For reference, the highest selling digital country song of the first quarter of 2014 was Brantley Gilbert’s “Bottoms Up,” which sold 682,000 copies. Just looking at the charts from last year and comparing them to this year’s chart, you can tell country music is taking a hit in the sales department (courtesy Billboard): 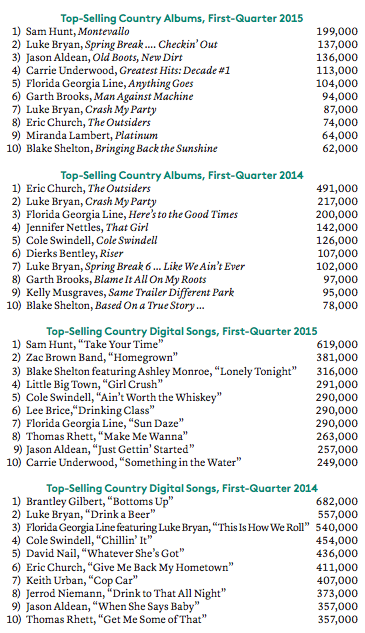 While sales are down across the board for everyone else, Sam Hunt is the only one putting up noticeable numbers. You see where I’m going with this? A monster has been created and when something gets big in country music, everyone else tries to replicate it. With Hunt being the clear cash cow and popular flavor at the moment, that means we’re going to get a lot more Sam Hunt shoved down our throats.

That leads me to this week’s announcement in the weekly Country Aircheck issue. As you all know this year is the 50th Annual ACM Awards and the ACM association is going all out for it. In addition to the bigger production of the awards show itself, they’re also taping a special titled ACM Presents: Superstar Duets, which will air on May 19. The announced duets were as follows: Miranda Lambert with Patty Loveless, Keith Urban with John Anderson, The Band Perry with Deana Carter and Sam Hunt with Dwight Yoakam. Wait…what? Those first three pairings I have absolutely no problem with. That last one however sticks out like a giant sore thumb and not in a good way.

One of your first reactions might be is why would Yoakam agree to do this? One of the following two things I’m guessing is the reason Yoakam is doing this: Yoakam has no real clue who Hunt is and agreed to do it out of principle or his label forced him to do it. Remember he is on the Warner Nashville label and he has a new album coming out. This is no indication that Yoakam is endorsing Hunt nor is he changing his sound to Hunt’s sound. So put to rest the hearsay that Yoakam is selling out. No, I’ll tell you the exact reason this collaboration is happening. This is Hunt’s team and Music Row’s attempt to get us “haters” to like and endorse Hunt.

They truly believe that throwing Hunt together with Yoakam will get Hunt doubters to like him. “Oh he’s singing with Yoakam. That means he’s one of us! That makes him country.” Hell no! How stupid and gullible do you think I am? You’re just making me hate Hunt even more. What you’re giving me with this pairing is trying to make me eat dog shit laced with bacon. But guess what? It still tastes like shit. Just give me the bacon and put the dog shit where it belongs. This is a collaboration that absolutely nobody was clamoring for. Traditionalists hate Hunt and Hunt fans have no idea who Yoakam is. Just wait for the tweets on Farce The Music’s Twitterfails of May. There will be plenty of tweets wondering who Yoakam is. I can also imagine that many Hunt fans who heard Yoakam’s music would call it old and boring.

The Hunt defenders and Music Row can kick and scream until they’re blue in the face about how “country” Hunt is and how he’s evolving the genre. They can try to pitch me on every angle on how Hunt is great and why I should like him. But you need to save your breath. Stop trying to make me like Hunt because it isn’t going to happen. His music is straight pop being sold as country music. He looks like a Euro disc jockey. Everything about him is a disgrace to country music and its history. If he was doing all of this while in the pop genre, I would have no problem with Hunt. But he’s not. Hunt is lying straight to my face with his music and his look by calling it country. It’s insulting on every level. I give Taylor Swift major props for finally moving to pop because she realized she was hurting her own brand by continuing to lie about her music. My advice to Hunt is to follow her lead and go to pop where he belongs. Don’t take your time like Swift did either.

Reba McEntire & Vince Gill – “The Heart Won’t Lie” – I’ve been listening to this song a lot ever since last week’s past pulse of mainstream country music. It’s Reba in her prime and Vince. How could you not like this song?

Non-Country Song of the Week

Ludacris – “Ocean Skies” – It’s 2015 and Ludacris put out a good song. In fact his entire new album Ludaversal was shockingly good. I never thought I would enjoy Ludacris music in 2015. Then again rap music, unlike country music, in 2015 has been great. Shoutout to Mark Grondin at Spectrum Pulse for his review of the album convincing me to give it a listen.

Well played Cake Bowen. I point this out in my upcoming review of “Don’t It.”

An iTunes Review That Will Make You Face Palm

This was left under Canaan Smith’s new self-titled EP. I only have three words for this review: What the fuck?

21 thoughts on “The Hodgepodge: Stop Trying To Make Me Like Sam Hunt”