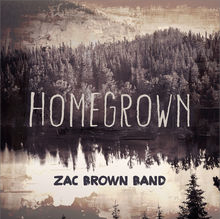 Each week I take a look the Billboard Country Airplay chart and grade the top 30 songs. The grading format I use each week is every song will receive either a +1, -1 or a 0. These will then be tallied up for an overall score, or pulse of the current top thirty country songs, with the highest possible score being a +30 and the lowest possible score being a -30. How do I determine if a song is rated a +1, -1 or 0? The rating it received on the site by either Derek or myself will determine this. If it hasn’t been rated yet, then I will make the call. Songs rated between 7 and 10 receive a +1. Songs rated between 5 and 6.5 receive a 0. Songs rated 4.5 or lower receive a -1.

Darius Rucker’s “Homegrown Honey” fell from #6 to out of the top 30 (recurrent).

The pulse remains the same at -4 this week. There wasn’t a lot of movement in this week’s airplay chart. The only song that dropped out of the top 30 this week was Darius Rucker’s “Homegrown Honey.” It went recurrent and simply had its run come to an end, just as everyone expected. I won’t miss it. Unfortunately the song that replaces it is also terrible. The new song in this week’s top 30 is Blake Shelton’s “Sangria,” a bland love ballad that sounds more creepy than romantic. While ballads are usually Blake’s strong suit, this love ballad just puts me to sleep. Then again the rest of his Bringing Back The Sunshine album doesn’t offer any more appealing single choices either.

Now for the great news: Zac Brown Band’s “Homegrown” sits atop the chart for a third straight week! It speaks volumes and shows how much people love this song. In a chart full of non-country songs, it’s nice to see a country song at the top of it. And I think it has a good chance of staying there for one more week. Hunt’s “Take Your Time” didn’t gain that much on “Homegrown” this week and is still over a million viewers behind it. When “Homegrown” does fall out of the top spot and “Take Your Time” replaces it, it will then have to hold off Dierks Bentley’s “Say You Do.” It had a nice gain again this week and should be close to top within a few weeks. Will Hunt get a multi-week reign at the top or will Bentley spoil the party? We’ll have to wait and see.

The biggest gainers this week were Blake Shelton’s “Sangria,” which moved up seven spots from #37 to #28, Jason Aldean’s “Tonight Looks Good On You” moved up four spots to #26 and three different songs gained three spots on the chart (Florida Georgia Line, Little Big Town and Brantley Gilbert’s singles). The biggest losers this week were Darius Rucker’s “Homegrown Honey” falling from #6 to out of the top 30 and Gloriana’s “Trouble” falling two spots to #30. As for songs I see falling out of the top 30 soon, Cole Swindell’s “Ain’t Worth The Whiskey” should fall out next week and I’m surprised it didn’t go recurrent this week with his new single being released. Other songs that should fall out soon are Chris Young’s “Lonely Eyes” and Miranda Lambert’s “Little Red Wagon.”

One of the four songs I predicted would make the top 30 soon last week made it this week. As for this week, the songs outside the top 30 I expect to see in the top 30 soon are Rascal Flatts’ “Riot” (or it will be stuck at #31), Dustin Lynch’s “Hell of a Night,” Luke Bryan’s “Games” and Thomas Rhett’s “Crash and Burn.” Maybe “Riot” will make it back in the top 30 again. Or it will be stuck at #31 for eternity. I’m starting to think the latter is more likely. I’m shocked “Hell of a Night” hasn’t gotten a bigger push, but then again I’m not clamoring for it to get a big push. So good job country radio? Luke Bryan’s “Games” got a solid bump in audience numbers this week, so perhaps his camp is pushing it to get more radio play now.

As for Thomas Rhett’s new disco country single, we all know it’s destined for #1. Not only was it a hot-shot debut at #38 (quite high for a new single), it was the most added song at radio and had the most increased audience this week. If this sparks a disco country phase, I might lose it. Seriously I might stop doing a mainstream pulse on a weekly basis because it would be pointless to just evaluate disco crap every week. What did we do to deserve the re-emergence of disco? There’s a reason it was mocked. Disco Demolition Night was a thing, country music. Perhaps this is the road country music needs to go down.