This past weekend I was set to go to a music festival in Cincinnati. However I changed my mind and plans changed. Long story, short I decided to ditch the festival and set off for The Rose Music Center at The Heights in Huber Heights, Ohio. It was there on Friday night Amanda Shires, Jason Isbell and Dwight Yoakam performed live. Now just Shires and Isbell alone would’ve been a great concert, but Yoakam on top of it is like a dream pairing for yours truly. Despite it being a few hours away, this was a trip I knew I had to make, especially after missing Isbell in Cleveland a couple of weeks earlier. It was absolutely worth my time. But before I talk about music, I want to talk about the venue itself. The Rose Music Center is only a few years old and this was my first time attending a show at the venue. After my experience on Friday night, I can absolutely recommend you check it out. It’s a wonderful venue that is clean, organized and has lots of parking. Not only that, but the staff is quite helpful and friendly. The venue is actually an amphitheatre and has a really unique, fun layout. The sound quality is top-notch too. So if you’re ever considering going to a show at The Rose Music Center, I would definitely recommend it.

Now onto the music! Amanda Shires opened the show with her band. I listen to music all the time, yet this was really the first time I’ve ever heard just Shires singing. Isbell and Shires released a two-song EP earlier this year that I listened to and reviewed. That was my pretty much my experience with Shires heading into the show. It’s embarrassing to admit as a country music reviewer, but sometimes an artist can slip through the cracks. I definitely regret not hearing her sooner, as she’s an absolutely talented artist that deserves to be heard by more people. Shires has a beautiful voice that can tell a brilliant story in her music just like her husband. Yet her voice isn’t what impressed me the most about her. What impressed me the most about Shires was her violin/fiddle play. It was stunning and completely floored me. The audience around me felt the same, as she got several lengthy applauses for it. She is without a doubt one of the best in country and Americana music today. I would put her against any other fiddle/violin player. On top of that she does this all while very pregnant, which by the way gave her a very glowing presence on-stage. Shires was the opener and I was already have an entertaining time.

Her excellently talented husband, Jason Isbell, came up on stage next. I’ve heard many glowing reviews about Isbell’s live performances and I was anxious to see if he lived up to the high expectations. Not only did he meet expectations, but he surpassed them. Isbell and his band The 400 Unit proved to me once again they’re one of the best in the genre. There is absolutely no difference between Isbell’s voice live and on a studio record. In fact I would almost argue he’s even better in-person. The amount of passion and drive behind every note and chord can be felt while sitting in the audience. The man truly understands and loves music. Isbell performed most of the songs off of his critically acclaimed 2013 album Southeastern, along with two new songs off of his new album coming out in July, Something More Than Free. The first was the already released “24 Frames” and the other was “Speed Trap Town.” You’ve already heard the first most likely and it’s pretty good. The latter is even better and could be one of the best off his new album. By the way I was surprised to hear another new song because Isbell is noted for not playing new songs ahead of their release.

While I was sitting in awe with each song, there were two songs in particular that moved the entire place. First was the emotional “Dress Blues.” I honestly got goosebumps during this song and almost even cried because it was so beautiful and moving. I remember looking out at the audience mid-way through and everyone was just glued to Isbell. He had complete command of everyone in that venue and rightly got a standing ovation after it. I’m so glad Zac Brown Band covered this on their new album and brought this song out of the shadows into the spotlight where it belongs. I guarantee Isbell picked up new fans after they heard this song, whether it be from Brown or Isbell himself.

The other song that moved the entire place was Isbell’s closing song, “Cover Me Up.” Before performing it, he explained how he wrote the song for his wife. But there are men who come up to him all the time, asking him to perform the song for their wife or girlfriend. Isbell humorlessly says that no he won’t because it’s his song for his wife. This got a good laugh out of the crowd. Then Isbell and The 400 Unit completely knock the song out of the park. Isbell during this song (and several other songs too) blasts a guitar solo that shows he is as equally skilled with his guitar play as he is singing. The whole place was just shaking after his song and they gave him a strong standing ovation that made me beam. I know for a fact there were people who didn’t know him before that night and are now fans. How could you not be impressed?

Before I get to Yoakam, I have to point out another amusing moment from Isbell because he’s so honest and has a great sense of humor. Isbell talked about between songs towards the end of his set about Yoakam and the little tour they’ve been doing together. He said Yoakam is one of his all-time favorites and by all-time favorites he means top 2, 3, 4 ever. He has a tremendous amount of respect for the country legend. Isbell then mentions that the whole time he’s been touring with Yoakam he’s been constantly telling himself not to circle around on stage and do little shimmies because that’s a Dwight move and he doesn’t want to copy him. Not just because of the respect, but because he says he can’t do it nearly as good as Yoakam. The crowd loved this and so did I. Everything Isbell says come from his heart and you can instantly tell this when you hear him speak. 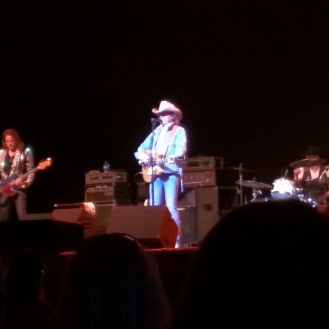 So I’m already sitting there just completely blown away already and Dwight Yoakam comes up on-stage to close the night. And folks it was like a rockstar atmosphere. Yoakam’s band is decked out in rhinestone covered suits that shine so bright I didn’t know how they weren’t blinded while playing. Yoakam comes out in his signature look: a cowboy hat, a denim jacket with a button down shirt and of course his signature skin-tight jeans. Now a passing by bro-country fan might point out how I don’t bash Yoakam for wearing skinny jeans, but I bash bro-country artists for it. Here’s why I don’t criticize Dwight: He makes some of the finest damn country music you can hear. When you make music this good you can wear whatever the hell you want to wear. I don’t give a shit because I’m too busy listening to the music.

Now when I say it’s a rockstar atmosphere, I mean the crowd is rocking and Yoakam and his band are just ripping through songs like it’s nothing. As soon as Yoakam and his band hit the stage they just went from song to song instantly, constantly holding your attention. His band is probably around my age, while Yoakam is 58 years old. You couldn’t tell it. In fact I would say his band is trying to keep up with him, rather than the other way around. Just like Isbell, Yoakam sounds just as great live as he does on his albums. His voice sounds exactly the same as it does on his first album. The man is ageless! Most singers “lose their fastball” in their advanced age, but not Dwight. Yoakam and his band played a mix of songs from his excellent new album Second Hand Heart, as well as old favorites like “Guitars, Cadillacs,” “Little Sister” and “Streets of Bakersfield.”

I remember when listening to Second Hand Heart before that night I would love to hear the songs performed live, as they were perfect for live performances. I was right, as they’re even better in-person. Yoakam hit the high notes perfectly on songs like “In Another World” and “Man of Constant Sorrow.” The latter of which I was really wanting to hear because it was such a rollicking song. I think the best way to describe it live is face melting and enthralling. Anyone who says real country music can’t be fun has never heard this or Dwight Yoakam. The other favorite of mine from the album was “She” and once again it was just as good live.

I could have written even more about this experience, but even over 1500 words couldn’t do it justice. Amanda Shires, Jason Isbell and Dwight Yoakam are all artists you simply have to see in-person for yourself. What’s amazing is that they’re all three different artists doing something different, yet it’s all pure, quality country music that will amaze and entertain you. This is the best concert I have ever been to in my life and every concert I see from here on out will be measured against this one. It was a remarkable I won’t forget. Thank you Jason Isbell, Amanda Shires and Dwight Yoakam for the marvelous experience.