With the holiday weekend coming up, I have plans to do stuff and I’m sure you do too. So instead of an opener in the Hodgepodge this week, I’ve decided to do another Q&A open thread. I did one a few months back and you guys seemed to like it, so why not do another one? That means you can ask me any music related questions. Perhaps you want my thoughts on a certain artist or an upcoming release. Or you want to know my favorite country song from the 90s. Whatever you have on your mind throw it at me. I’ll take any questions about the site too. Just don’t ask me something like naming my top ten favorite Alan Jackson songs because that would be impossible for me to answer.

Before we get to the questions though I have some site news. This will be my last Hodgepodge I’m writing. But don’t fear! It’s not going away, as I’m now handing it off to Derek starting next week. He’ll continue the Hodgepodge and do an excellent job with it. Derek has been wanting to do a weekly feature for a while and I wanted to keep the Hodgepodge going. I didn’t want to get rid of the Hodgepodge, as I know you guys love it and this new idea I’m working on wouldn’t allow me time to do it. I’m currently working on an idea for another weekly feature, something I’ve been wanting to do for a while. When I have news on it, you’ll be hearing about it. So stay tuned!

Dierks Bentley – “Settle For A Slowdown” – I picked up Dierks Bentley’s Greatest Hits: Every Mile A Memory 2003-2008 album this past week and I had completely forgot about this song. It’s definitely one of Dierks’ best songs and it’s held up pretty well over the years.

I’ve tweeted a bunch about this album already, but I wanted to make sure I suggested right on the site too. Leon Bridges just released his debut album Coming Home and it’s awesome. It’s throwback R&B, soul music at it’s finest. Bridges brings back a sound from a bygone era that was missing from today’s generation. The album is very old school and you definitely need to check it out.

A good thing to say to a bad blues guitarist is "You play the blues like your parents are still together."

So a couple of weeks back I reviewed the new single from Hunter Hayes, “21.” I wasn’t very fond of the song and I clearly explained in my review why “21” is a bad song. Now when I wrote this review, I figured there would be a few negative responses. Instead I got several tweets from Hunter Hayes fans cursing me out. Keep in mind these are coming from middle-aged housewives and teenage girls. Other than Florida Georgia Line fans and maybe A Thousand Horses’ fans, I had never gotten such a violent and vociferous response to a negative review. There were several responses, but there was one gem that stood out amongst the rest and is easily the greatest response I’ve ever received on a review. Behold in all it’s profanity-laced glory! 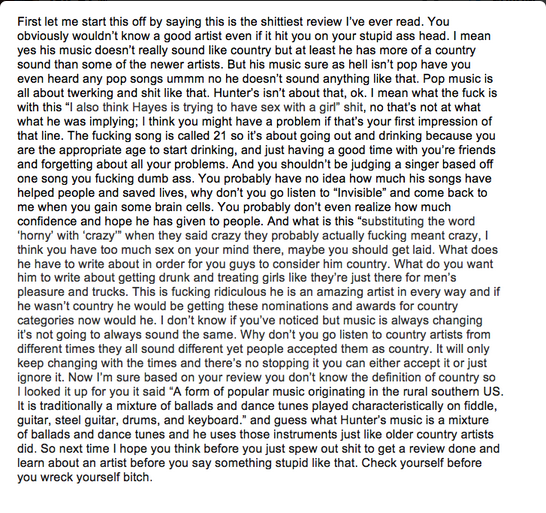 Naturally my response to this bat-shit insanity:

Who would have thought a Hunter Hayes fan was capable of such a rant? Neither Derek or myself ever expected this kind of response from a Hayes fan. I get being passionate about your favorite artist, but getting this worked up over a negative review is ridiculous. But hey thank the Internet for giving us glorious gifts like this rant.

Also Happy Fourth of July from Country Perspective to all of our American readers! Enjoy your holiday weekend and be safe!

59 thoughts on “The Hodgepodge: Q&A Open Thread Plus Some Site News”