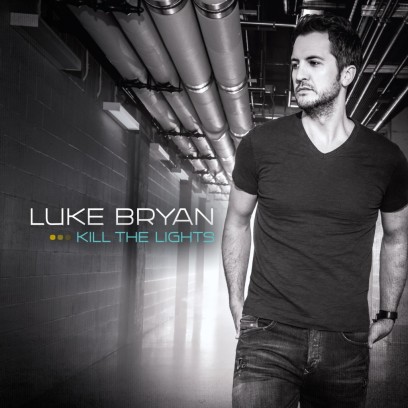 Luke Bryan just came out with his new album Kill The Lights. For weeks I’ve been telling myself that I’m not going to review this album. I told myself to just stay away from it and let this album be. There’s plenty of great country music out there that can be reviewed instead. Yet here I am reviewing Kill The Lights. The reason I ultimately decided to review this album is because the world needs negative reviews too. It’s too easy to just ignore a problem. You have to face it head on. It’s important to point out when a big artist makes such terrible music for educational purposes, critical purposes and of course for amusement. Luke Bryan has been one of the biggest stars in country music for the last several years and shows no signs of slowing down in terms of popularity. Kill The Lights went head-to-head in sales with Dr. Dre’s new album Compton. Bryan isn’t going away and he’s impossible to ignore. So I bit my tongue, held my nose and listened to Bryan’s new album. I actually half-expected for it be better than his last album Crash My Party. But I was very wrong.

The lead single and one of the worst songs of 2015, “Kick The Dust Up,” leads off the album. If you missed my take down of this horrible song, here’s a refresher: This is the same old shit we’ve heard for the last three years. As for the instrumentation, it’s a pop, rock, adult contemporary arrangement for the most part. The exception is a Middle Eastern guitar riff that cuts in on the first chorus and plays intermittently for the rest of the song. This is the only part of this song that I don’t hate. But why is it in the song? It doesn’t make any sense at all nor does it match the theme. My guess is that it was thrown in because they thought it sounded cool. Remember we’re not dealing with musicians here, just hit makers looking for more cash.

The album’s title track is next and it’s not any better. The sound of this song is just bizarre and couldn’t be any further from country. The rhythm of this song sounds almost exactly like “That’s My Kind of Night” and definitely has the same theme. The only difference is this sounds more like Sam Hunt’s version of “country” instead of bro country. This sounds like an album cut from a Starship album. Bryan’s newest monstrosity released to country radio, “Strip It Down” is next. This is basically Bryan’s version of Jason Aldean’s “Burnin’ It Down.” For a song that’s supposed to be sexy, Bryan sure sounds serious. And who the hell finds this crap to be sexy? All I picture is a 40 year-old Bryan lurching at a 16 year-old girl across the bar thinking she’s 18. The definition of creepy! Also this isn’t country at all.

Luke Bryan is joined by Little Big Town’s lead singer Karen Fairchild on “Home Alone Tonight,” a song that almost made me barf into my mouth upon first listen. And I’m just going to say it: they both sound absolutely horrendous in this song. When Fairchild doesn’t sound flat, she sounds distorted. Bryan’s charisma is completely devoid in this song. Oh and the people described in the song are completely unlikable and annoying. It’s about two people going out, partying and taking pictures of each other to send to their exes. What’s the damn point? There isn’t one. “Razor Blade” is another pointless, garbage song. The production in this song and really the majority of this album is grating on the ears. It makes Jay Joyce albums sound under-produced. It’s just another vapid drinking and hooking up song where Bryan tries to be sexy and fails hilariously.

It’s not until the sixth song on the album that there’s something that isn’t completely terrible and that song is “Fast.” It’s a song about life going too fast and trying to enjoy things happening in front of you at the moment. The lyrics are pretty decent, even though they feel reminiscent of “Drink A Beer.” But the big problems with this song are the instrumentation and production. It’s overproduced and isn’t country at all, unless you count drum machines as country because there’s plenty of those. The pace of the song is also too frenetic and doesn’t give the lyrics time to really sink in for the listener. In capable hands, this song could have possibly been good.

The overproduced bullshit continues on “Move.” This is “Country Girl Shake It For Me” version 1,529. I can imagine the only groups of people who would be entertained by such a vapid and shallow song like this are suburban teenage girls and soccer moms who lead boring lives. And you might say it’s out of line for me to mock the fans of Bryan, but you’re wrong. Their basic taste is part of the reason why country radio sucks so much. Of course it’s also equally the radio programmers’ faults for catering to them. Anyway this is another all-around terrible song on an album full of them. Bryan produces another not horrible track in “Just Over.” It’s a heartbreak song with lyrics that aren’t bad. But once again the bad production overshadows a song. There are way too much drums and not enough organ play that you can faintly hear at the beginning of the song. If you completely overhauled the sound of this song to make it country, this song would still need work though.

I said it for “Fast” and I’m going to say it again for “Love It Gone.” This love song has somewhat okay lyrics I guess, but the production is so damn annoying and overbearing that it’s hard to follow the song. I would love to post Zac Brown’s quote about not using real instruments here, but he’s a turncoat bastard on Bryan’s side now. So I’ll just point out how this sounds like every other adult contemporary song posing as country I’ve heard this year. “Way Way Back” is same shit, different song. The club beat is so damn blatant here that I can imagine Bryan was pissing on George Jones’s grave as he recorded this song. This song is a metaphor for it anyway. Bryan isn’t even trying to be country at this point. He’s accepted his role as the old guy desperately clinging to youth to continue to suck on the teat of stardom.

One of Bryan’s closest attempts at sounding country and sincere is on “To The Moon and Back.” It’s a song where Bryan expresses his love for a woman, without sounding like a misogynistic asshole. And it’s not overproduced either. It’s a Christmas miracle! But here’s the thing: it’s under-produced. This song is so lifeless and boring I nearly dozed off halfway through it. Still it’s one of the better ones on the album, but that’s not saying anything. The penultimate song on Kill The Lights is “Huntin’, Fishin’ And Lovin’ Every Day.” It’s the second Dallas Davidson co-write on the album. I hate typing that sentence. It’s one of my least favorite sentences. Usually anything associated with Davidson is just awful and something to avoid at all costs. This song is no different. Many will point out this song sounds country and they’re right, except it still stinks. This is just a callback to the “golden days” of the late 2000s when checklist country dominated radio and was the predecessor to bro country, the predecessor to the current crap on country radio. The people who call themselves “true country folks” and consider Justin Moore an outlaw country artist will love this song, as this song is a masturbatory exercise for them. Also the phrase “red dirt rich” is uttered throughout the song and I’m sure this just pleases you Texas/Red Dirt fans.

Kill The Lights mercifully comes to an end with “Scarecrows.” People who still have respect for Bryan and give him the benefit of the doubt will say this is a good song, but I’m not one of those people. This song will never be a single and that’s all that matters. Bryan is defined by what he releases to radio, not buried album cuts. The song is a heartfelt tune about not forgetting your roots and I can appreciate it in a vacuum. But I would rather imagine scarecrows coming to life and attacking Bryan and the bros hanging out in the cornfields. This image in my head is more entertaining than this album.

I didn’t think it would be possible for Luke Bryan to put out an album worse than his 2013 release Crash My Party and yet he has done it with Kill The Lights. There are so many issues going on with this album that I could have written even more about it, but it’s not worth spending any more time than I have on it. The first half of this album is so atrocious that it’s on level with some of the worst music I have ever reviewed on Country Perspective. The second half of the album has some decent music, but for most casual fans with taste there’s no chance in hell they make it this far into the album. Bryan at this point in his career has become Gumby for Music Row. He’ll bend and contort into whatever is the latest trend. In his last album he pandered to bro country and now he’s giving his own take on the Sam Hunt, R&B styled “country” music. There’s not a single good song on this album, only a few decent ones. Some are giving him a little credit for this, but they shouldn’t. The decent stuff won’t sniff country radio, so to me it’s all moot. Kill The Lights deserves the dishonor of becoming the second album ever on this site to receive the lowest score possible.

33 thoughts on “Album Review – Luke Bryan’s ‘Kill The Lights’, An Exercise in Avoiding Being Country At All Costs”