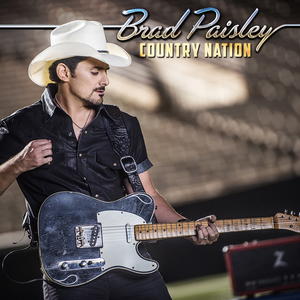 I hate to say I told you so, but I told you so. I called this back in August 2014 when I reviewed Brad Paisley’s new album Moonshine In The Trunk. This is what I wrote regarding “Country Nation” in my review:

I guarantee it was created for the sole reason to play in bumpers on ESPN during college football season.

Sure enough this prediction has come to pass for the 2015 college football season, as this song has been playing on ESPN on the opening weekends of college football season. Paisley was the special guest picker on College Gameday in week one. This has what it’s come to for Brad Paisley: he’s essentially become Kenny Chesney. Point out as many good Chesney songs as you want, but at the end of the day many roundly mock him for his cheesiness and the same is happening to Paisley now. Both deserve it. I didn’t plan on reviewing “Country Nation,” but Paisley decided to take it a step further and release this as a single to country radio. He forced my hand and now I’m going to give it the criticism it deserves.

“Country Nation” is one of the most cliché, corporate, formulaic song I’ve heard this year (written by Paisley, Chris DuBois and Kelley Lovelace). Out of all the terrible singles this year, I think this single had the least amount of effort put into it. This song is literally about nothing. It opens up with Paisley singing about steel mills and other blue-collar worker colloquialism. But this doesn’t define us. No, it’s the logo on our caps according to Paisley. Then Paisley goes into full laundry list mode and I cringe extremely hard:

I don’t know whether to laugh or throw something. Perhaps both! He name-drops popular college football team’s nicknames, which ensured ESPN would pick it up. By the way I should probably mention I’m a huge college football fan who has had to sit through years of terrible music during the season and this one may be the worst yet. The only one that I would say top it is Fall Out Boy’s “Centuries.” For those who also watch college football, you’ll know what I mean. Back to the name-checking: next Paisley mentions Ford and Chevrolet. Sucking up to corporations! Anyone with a brain could see through this. Then he subtly mentions NASCAR, as the 24 and 88 reference NASCAR drivers Jeff Gordon and Dale Earnhardt Jr. It should be noted that Paisley also has a strong affiliation with Hendrick Motorsports, which I know because I’m a NASCAR fan too and Paisley sucks up to the team every season on social media. He then tops this big bowl of sucking up off with kissing up to patriotism and country radio.

You get the picture? This is the most nauseating, kiss ass song ever. Paisley essentially writes a love letter to his corporate benefactors and calls it a song. Some may say I’m being too harsh, but remember Paisley’s history of music. He’s been making huckster cornball music for years and he’s now reached the point of making so much of it that it’s at an over-saturation point. You can only go to the same well so many times before people are absolutely sick of it. It shows that Brad Paisley is bored with his music and just throwing out songs that he can knock out in his sleep. He’s desperately pandering to mainstream relevance by releasing songs like this to country radio.

“Country Nation” is a perfect example of why Paisley and country radio currently get no respect. There is no creativity, effort or emotion put into this song. Sure, it has a country sound and the instrumentation isn’t offensive, but who cares? When the lyrics are so by the book and pandering, you essentially tune the song out and ignore it. This will probably be the final single from Moonshine in the Trunk for Paisley, as it’s the fourth single from it. The only good single released from it, “Perfect Storm,” unsurprisingly has been the best performing from it, as it reached #4 while the others didn’t go above #12. I don’t expect “Country Nation” to go above it either and it’s really what it deserves. Avoid this song at all cost and hope Paisley learns his lesson from releasing embarrassing crap like this song.