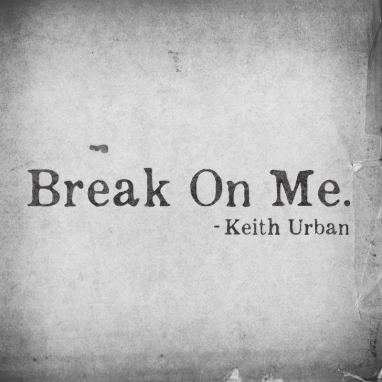 When you look back at the pop country of the 2000s, Keith Urban is certainly one of the biggest names to emerge from the era and experience a lot of success. The sincerity of his voice combined with the easy-going pop country stylings in his music made him a big fan favorite amongst mainstream country fans. Personally, Urban has always been just sort of there for me. It wasn’t until his last single “John Cougar, John Deere, John 3:16” that I formed a strong opinion on one of his songs. That single to me was nothing but a giant word vomit of clichés. The song was basically about nothing. And of course it reached the top five on the country airplay charts. I was surprised it didn’t reach #1 and the only reason it didn’t was because of the strong airplay of Kenny Chesney’s “Save It For A Rainy Day.” Urban has now released the follow-up and the second single of his upcoming eighth studio album, titled “Break On Me.”

Well I can say it’s an improvement over “John Cougar, John Deere, John 3:16.” Then again Urban had nowhere to go but up after that song. “Break On Me” plays on the theme that is quite popular in mainstream country music and that is romantic slow jams with pop elements infused throughout. The song is about how a man offers his shoulder to his loved one and that she’s welcome to “break” on him. The lyrics, written by Ross Copperman and Jon Nite, aren’t half bad. They do a decent job of conveying emotion and giving the song somewhat of a feel. It’s a shame they really never get a fair chance to shine, as the production kills most of my interest in this song. I don’t even know how I would describe it. The electronic elements and heavy Reverb throughout the song is annoying and unnecessary. The only reason this is included is because that’s the current popular sound in the genre right now. It serves no purpose other than this. If the song sticks to a simple acoustic guitar and piano, it might actually be good. Instead it’s just another forgettable, bland romance song on country radio.

I can see what Keith Urban was going for with this song, but it misses the mark in too many areas to accomplish it. Urban has always been a pop country singer, but this is just too much pop for my taste. As I’ve seen many point out on Twitter, it’s very Ed Sheeran-esqué. Based on the sound of these first two singles from Urban’s newest album, I’m expecting him to go more pop than ever before with his music. It’s not as bad as Sam Hunt’s version of urban country, but it’s still forgettable and unimaginative nonetheless. “Break On Me” is a sleepy ballad that I’m sure many urban country fans will praise as deep and emotional, but to me it’s just a less offensive version of Luke Bryan’s “Strip It Down.”