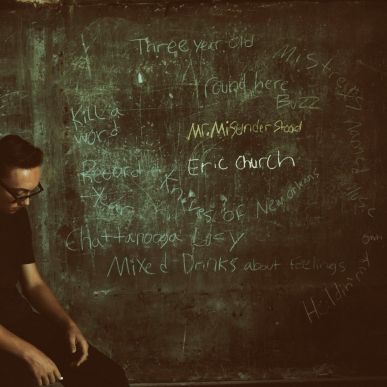 What a surprise! Eric Church caught the entire world off guard when he released his brand new album Mr. Misunderstood in the midst of the 2015 CMA Awards. The first signs of it didn’t appear until members of Church’s fan club received it in the mail days before it was available to the public. Then everyone listened to it and I think I can speak for most people when I say we once again said, “What a surprise!” I never reviewed Church’s previous album The Outsiders here on Country Perspective, but anyone who has followed this site for a while has known my stance on it. I wasn’t fond of it all and found it to be highly overrated and over-produced. I found it to be a sonic mess with no cohesive theme or direction while also lacking a country sound for the most part. I was definitely one of the most negative about it amongst critics. I like to think Church listened to this feedback because every problem I had with The Outsiders is non-existent on Mr. Misunderstood. This album is a complete 180 and features what I consider the deepest and most inspirational music of Church’s entire career.

The album’s title track and lead single kicks this album off. It’s an appropriate opener, as it essentially lays out what this album is all about and that’s Eric Church and his love of music. Church sings about how he grew up as “Mr. Misunderstood,” the kid in the back of the class who didn’t fit in with his friends who “got their rocks off” on top 40 radio. Instead he was the kid who listened to his dad’s vinyl and the likes of Elvis Costello, Ray Wylie Hubbard and Jeff Tweedy (a really cool shout out to three talented artists who have clearly influenced him). It’s an acoustic driven track influenced by southern and heartland rock. There were many things I found relatable about this song and I think many other listeners feel the same when they hear it. This is Eric Church at his best, something I find myself saying a lot as I listened to this album.

The gospel-influenced “Mistress Named Music” follows. Just like “Mr. Misunderstood,” Church sings of his love of music and how it’s been a part of his life ever since he was a kid listening to the organ player in church. The instrumentation on this song is really well done, perfectly meshing country, rock and gospel to create a compelling and interesting listen. It should be noted Church wrote both of these first two songs of the album with Casey Beathard, a fellow country artist and somewhat known songwriter. The upbeat and acoustic-driven “Chattanooga Lucy” is the closet thing to a party song on this album, although I wouldn’t classify it as such. It is a very fun song to listen to and move your feet along with. There’s not a lot of depth on this song, but that’s not a problem considering most of this album has a lot of depth and takes on a more serious tone. So this is a nice breakup and something to play when you’re looking for some mindless music to put on in the background. “Mixed Drinks About Feelings” is a heartbreak song penned solely by Church himself. The man in the song is trying to drink his sorrows away after his woman left him and it’s not helping that much. Church duets on the song with blues artist Susan Tedeschi and their voices go together greatly. Their voices and instrumentation create the perfect mood in the song and it’s arguably the one of the best heartbreak songs Church has released.

There are many great songs throughout this album. But one of the standouts amongst them and most buzzed about I’ve heard so far is “Knives of New Orleans.” The song is about a criminal on the run trying to escape his sins and looking for his getaway key. It’s one of those songs you have to hear for yourself to truly appreciate and once you do you know it just fits Church perfectly. He wrote the song with the brilliant Travis Meadows and Jeremy Spillman and I would have loved to be in the room when they finished penning this song because I can only imagine the reaction. One of the more under-looked songs on the album, “Round Here Buzz,” is next. It’s about a man sitting on the hood of his car drinking, as he thinks about the girl who just left him. He’s perfectly content to just sit there and take in everything around him, as his heart heals. Living in a small town is part of the theme of this song too and unlike in The Outsiders, Church avoids being cheesy or unimaginative and instead does a great job describing it in an authentic way. It’s a really solid song that takes a few listens to really grasp, but once you do you definitely appreciate it much more.

One of my personal favorites on Mr. Misunderstood is “Kill A Word.” It’s about getting rid of negative words and really negativity in general, as Church says words are something that can’t be unheard or unsaid. The songwriting is really sharp, clever and catchy, while also avoiding the pitfall of getting too pandering (hello “We Shall Be Free). But really what takes this song to another level for me is the vocal performances delivered by Church and guest performers Andrea Davidson and Americana artist Rhiannon Giddens. I particularly want to highlight Giddens, who is an amazing artist and delivered the performance of the night at this year’s Americana Awards. I have an immense amount of respect for Church including her on such a powerful song. “Holdin’ My Own” is Church’s ode to his family. Another one penned solely by himself, Church is proud of how he’s been able to survive the early years of his life and how’s he now able to hold his arms around his wife and two boys and do what he loves for a living. You can tell how close and sentimental this song is to Church and his heart shows more on this song than any other on the album. This is a song straight from the heart and for the heart.

While I pretty much love this entire album, the best song on Mr. Misunderstood is “Record Year.” In fact I’ll go so far to say this may be the best song Eric Church has released in his entire career. “Record Year” is about a man who has just broken up with his girlfriend and turns to his vinyl collection to heal his heart. While he plays these records he slowly heals and not only gets over his heartbreak, but also rediscovers himself and some great music along the way. More than anything it’s a song about finding your way in life when things are at your darkest. When Church releases this as a single (it has to be a single), I predict it will be the biggest hit of his career and will go down as one of his signature songs. This is a special song that hits a home run in every department.

Mr. Misunderstood comes to a close with “Three Year Old.” Church is once again inspired by his family, particularly his three-year-old son Boone, on this song. He sings about all of the lessons he has learned from him and how it puts into context how simple life is through the eyes of a child. It reminds you as an adult how we can over complicate stuff and how we need to step back to realize this. It should also be mentioned his son nicknamed the guitar that Church wrote this album with, “Butter Bean.” So it goes back to where this album all began. Not to mention this album started off with Church relating back to his younger days and ends with him as an adult watching his own child grow up before his very eyes.

Mr. Misunderstood is hands-down the best album Eric Church has released in his career. While The Outsiders felt like a contrived, egotistical vanity project, Mr. Misunderstood is Church’s love letter to music. He went back to his roots while also incorporating a sense of freshness that had been needed in his music. It’s no secret that Church is not strictly a country artist and loves to dabble in other genres too. This has hurt him a lot in past albums, but on this one he finds the perfect balance. He incorporates influences from blues, soul, southern rock, heartland rock, folk, gospel and funk in a way that maintains the integrity of the music while also making something new and creative. The songwriting is sharp, well-written and varied in theme and the writers Church brought in alongside him fit well. While I wouldn’t call this an album of the year contender, it is definitely one of the top 30 albums I’ve heard in country this year. It’s an absolute must-listen. Mr. Misunderstood has made me believe in Eric Church and his music once again.

32 thoughts on “Album Review – Eric Church’s ‘Mr. Misunderstood’ is His Best Work Yet”