Over the course of 2015 we saw many talented female country and Americana artists put out fantastic albums. Determining who will win Country Perspective’s 2015 Female Artist of the Year award will be no easy feat. The main guidelines for determining who should win are the following: the quality of music they’ve released in 2015, the impact they have made on the genre over the course of the year and the amount of growth they made as an individual artist.

Derek and myself will ultimately determine which artist will win, but we also want to hear from you the readers who is deserving of the award. Your comments will be highly considered for determining who wins and you could possibly sway who should be the winner. So be sure to sound off in the comments! Without further ado the nominees for Country Perspective’s 2015 Female Artist of Year (in alphabetical order):

One of the most underrated albums of the year has to be Brandi Carlile’s The Firewatcher’s Daughter. Blurring the lines between country, rock and Americana Carlile delivers music that touches the mind and heart. She’s a truly great artist that deserves more attention. As I said in my review of her newest album:

The Firewatcher’s Daughter is an album you’ll need to hear multiple times to fully grasp, but trust me it’s well worth it. Carlile’s dynamic voice and the cornucopia of genres mixed together make for one hell of an album. While Music Row continues to push cookie cutter female artists who produce music that panders to the latest fad, there are talented female artists outside that bubble like Carlile making innovative music. Some people will call this album a rock album. Others will say it’s alternative or a country album. Does it really matter though? This is just great music that any music fan can appreciate.

I feel like Kacey Musgraves sort of got lost in the fray in 2015. Throughout 2013 and 2014 she received lots of critical praise and awards from multiple outlets for her major debut album Same Trailer, Different Park. One of the big reasons why I think this happened is because her sophomore album Pageant Material didn’t have the incendiary political commentary that attracted so many outside fans and media outlets with her first album. That’s a damn shame because I felt like Pageant Material was not only a better album, but a big step forward for Kacey. I don’t think she liked all of the political attention, even though it really helped elevate her close friends Shane McAnally and Brandy Clark. Kacey considers herself just a “dimestore cowgirl” who loves to make authentic country music and that’s the place she wants to be going forward. And she’s still having plenty of success without any support from country radio.

Like Kacey Musgraves, Lindi Ortega has generated her own critical buzz in recent years. Her previous album Tin Star was called by many one of the best country albums of 2013. So the anticipation and hype going into her new album this year was certainly high. While Faded Gloryville didn’t quite live up to its hype, it was still a very good album full of solid music. While many mainstream female country artists love to sing about pleasing their man, Ortega sings about what pleases herself and doesn’t pander to stereotypes. She goes against the grain and sets a great example for young female listeners everywhere. Not to mention, she wrote a great piece on women in country music after the TomatoGate incident. 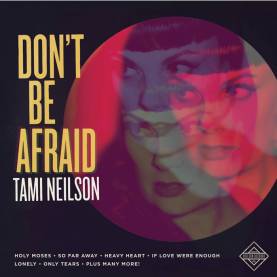 For the second straight year Tami Neilson finds herself on many of our year-end awards list. And for great reason, as she once again delivered one of the best country albums of the year. Don’t Be Afraid copes with the loss of a loved one (Tami’s father) and how to deal with this heartache and the memories you had of them. Neilson’s big and dynamic voice is capable of belting out the loudest and softest of songs, conveying the perfect amount of emotion to connect with the listener. While I don’t think many music outlets in the U.S. give her the respectable amount of attention she deserves, her home country New Zealand certainly does. Not too many artists can deliver great albums in back-to-back years, but Neilson has done it and that makes her favorite to win this award.

We saw a lot of great new artists burst onto the scene from country and Americana this year. One of the best was undoubtedly Whitney Rose. Hailing from Canada, Rose teamed up with smooth-voiced frontman of The Mavericks, Raul Malo, to make her sophomore record Heartbreaker of the Year. And when you combine two great minds like this, magic happens. Heartbreaker of the Year is one of the most uniquely sounding and creative country albums I’ve heard this year. Infusing retro pop with classic, traditional country, Rose delivers stirring love ballads and quirky stories. She more than holds her own singing next to Malo on “Be My Baby” too. What’s crazy is I don’t think this is even her best work and it’s still yet to come.

Who do you think should win? Be sure to comment below.