The Sour 16 round of Country Perspective’s 2016 Worst Country Artist Tournament is now over! It was definitely a lot quieter than the first round, although that didn’t make the results any less intriguing. Who moved on… 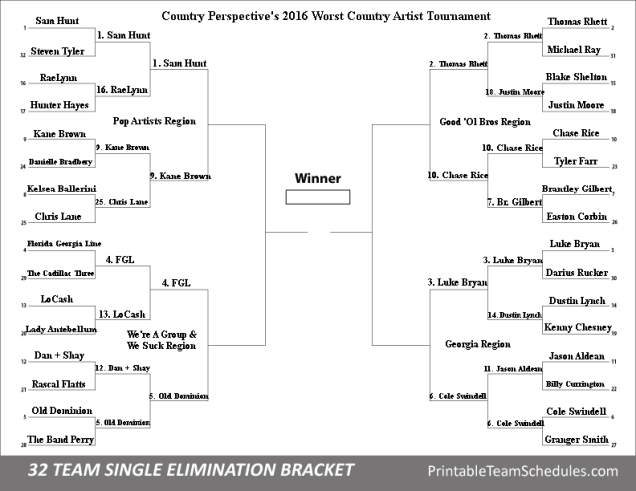 Unlike the first round where we had very two close contests, this round featured all blowouts as the field really starts to narrow down to the absolute worst. In the Pop Artists Region, the #1 seed Sam Hunt blew out #16 seed RaeLynn, winning nearly 75% of the vote. I’m surprised RaeLynn didn’t draw more ire. Then again I think the main factor that came into play here was impact, as Hunt’s impact is way larger than RaeLynn’s impact. #9 seed Kane Brown had a similar result as he took down #25 seed and the Cinderella of the tournament, Chris Lane, winning over 72% of the vote. I have to believe the “one hit wonder” factor came into play here, as Lane only has the one terrible single that has made an impact compared to Brown who appears to breaking out in 2016 and set to make a big impact. In the We’re A Group & We Suck Region, #4 seed Florida Georgia Line and #5 seed Old Dominion both destroyed their opponents, #13 seed LoCash and #12 seed Dan + Shay respectively. This region has played out exactly how everyone expected it to go, as there aren’t too many toxic groups in country music. It’s certainly making me reconsider regions for next year’s tournament.

In the Good ‘Ol Bros Region, #2 seed Thomas Rhett obliterated #18 seed Justin Moore with over 87% of the vote. The match-up of #7 seed Brantley Gilbert and #10 seed Chase Rice was expected to be close by yours truly, but I turned out to be wrong. Rice continues his momentum, as he easily beats Gilbert, winning just over 67% of the vote. You the voters have made it loud and clear that I under-seeded Rice. I underestimated the amount of ire you still hold towards him. Finally in the Georgia Region, #3 seed Luke Bryan took care of #14 seed Dustin Lynch, winning exactly 80% of the vote. Once again I was wrong in predicting a close match-up, this one being #6 seed Cole Swindell versus #11 seed Jason Aldean. While it was close very early and finished as the closest result, in the end it was obvious as Swindell won over 59% of the vote to Aldean’s nearly 41% of the vote. What put Swindell over the top seemed to be his clear lack of quality music compared to Aldean having some quality music, despite Aldean’s obvious detrimental impact on the genre over the last few years.

We now move on to the Egregious Eight, where the match-ups get even tougher to decide. For those who aren’t aware of the definition of egregious, it means “outstandingly bad.” The perfect description for our remaining eight! In the Pop Artists Region Final, we have #1 seed Sam Hunt taking on #9 seed Kane Brown. In one corner you have an artist who has introduced metro bro to the genre and in the other we have an artist who calls themselves “the Justin Bieber of country music.” Hunt has clearly made the bigger impact on the genre to this point, but Brown appears poised to make a big impact himself. Hunt is still the clear favorite here, but I could certainly see Brown making it interesting.

In the We’re A Group & We Suck Region Final, #4 seed Florida Georgia Line meets #5 seed Old Dominion in a truly titanic meeting. Two years ago Florida Georgia Line received our Worst Album of the Year award. Last year Old Dominion won the same award. I’ll be completely shocked if this doesn’t go down to the wire. Florida Georgia Line made bro country huge and while their stature has slipped some lately, the sour taste they left in many people’s mouth is still there. Old Dominion is rapidly gaining popularity and racking up hits, appearing to be the next big group in mainstream country. Their lead singer Matthew Ramsey also has one of the most unlikable personas in the genre and it rubs off in the music, most notably on “Break Up With Him.” So out with the old or in with the new?

In the Good ‘Ol Bros Region Final, #2 seed Thomas Rhett faces off with #10 seed Chase Rice. Rhett has made it to this spot rather comfortably, as his awfulness is in full swing at the moment and shows no signs of slowing. But he meets his toughest test in Rice, who has beat opponents with surprisingly relative ease. There’s a great chance Rice might not even make the tournament next year, as he rose up the ranks by latching onto the bro country fad that is clearly dead now. He hasn’t even made that big of an impact in his short time in mainstream country. Yet you the readers have made it clear you don’t like him. Not sure how this one will play out. Finally we have the match-up I’m the most intrigued by and will watch closely. In the Georgia Region Final, #3 seed Luke Bryan will square off with protégé and #6 seed Cole Swindell. Bryan is the godfather of bro country and has continued his reign of terror by getting on the metro bro wagon. Of course everyone knows Swindell was a former merchandise peddler for Bryan and is what led to him getting his big break. Bryan essentially created Swindell. So you the voter is tasked with voting for Dr. Frankenstein or Frankenstein’s monster.

Remember you can only vote once, as much as you want to vote for both. I can’t wait to see how the Egregious Eight plays out! Thank you all to everyone who has voted and participated so far. We’re getting down to the truly worst and hope all of you will continue to participate. The polls for this round will open on Monday March 28 at 1 PM ET. May the worst win!