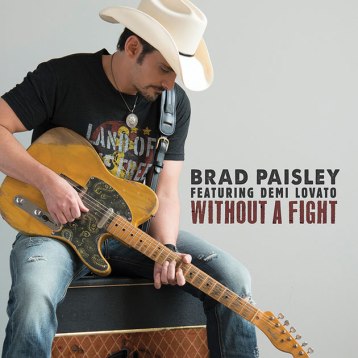 If you asked me to name the five biggest disappointments in popular country music the last few years, I would undoubtedly include Brad Paisley. For the first half of his career, he was up near the top in terms of churning out quality country music in the mainstream sect. From sentimental love ballads like “We Danced” to humorous tunes like “I’m Gonna Miss Her,” I looked to Paisley for consistently good music. Then over the past few years Paisley has went through a “mid-career crisis,” something many artists when they get older go through where it shows they’re desperate to stay in the spotlight. The lazily written “River Bank” and the sophomoric “Crushin’ It” are perfect examples of it. So when it came out that Paisley’s new lead-off single for his next album would be a collaboration with pop artist Demi Lovato, I just rolled my eyes and said to myself, “No, Brad. Why can’t you stop chasing for attention?” Well that collaboration is out now and it’s called “Without A Fight.” And I have to say I’m pleasantly surprised.

I fully expected this song to lean heavily towards a pop sound because after all Demi Lovato is involved. While I wouldn’t say I’ve ever been a fan of Lovato, I do respect her vocally when she tries (there’s a noticeable difference when she doesn’t). You look at “Without A Fight” on paper and it shouldn’t work. Then you listen to it and for the most part it works. It’s a love ballad duet about a couple who spend a lot of time arguing and fighting, but they pretty much always end it by making up in more ways than one. The whole song plays on the dynamic of lovers versus fighters, with both wanting to be able to make up without a fight. But in a weird way they realize the arguing shows how much they care for each other. The song was written by Paisley, Kelley Lovelace and Lee Thomas Miller, and for the most part capture what they’re going for, although it may lean a little too heavy on the making love part for some listeners. Paisley sounds fine vocally as usual and blends well with Lovato, who’s vocals give it a nice punch (especially towards the end). The instrumentation is kept simple with the Telecaster guitar play throughout, along with some faint pedal steel guitar in the background.

“Without A Fight” may not go down as one of Paisley’s best singles, but to my ears it’s a step back in the right direction. At worst this song is an upgraded version of Chris Young and Cassadee Pope’s “Think of You.” At best it’s a solid, yet unspectacular love song. I think it does a nice job of striking a balance by keeping a country influence and pop sensibilities. I have to give credit to Paisley for picking Demi Lovato because she and Paisley go together well. Ultimately she helps raise the song, which is what a guest collaborator is supposed to do. I’ll be interested to see how much her presence will help this song’s performance at country radio, which had to be one of the reasons behind the collaboration. I gladly eat some crow with this song, so kudos to Paisley for proving my doubts wrong. Let’s hope the album is even better than “Without A Fight.”

20 thoughts on “Review – Brad Paisley’s “Without A Fight””