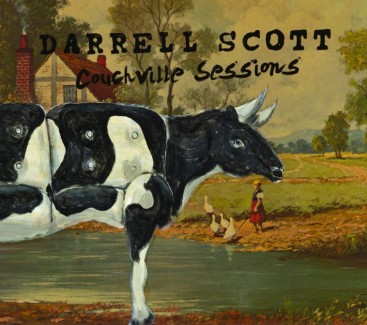 One of the reasons why I love Americana and great country music is the brilliant songwriting. The stories that the songs tell and the amount of emotions it brings out of the viewer is something you can’t put a price on. Derek pretty much hit the nail on the head in his piece last week on why songwriting is so important to him. Excellent songwriters don’t just spring out of thin air, so when I come across one I cherish their music. Darrell Scott is one of those few excellent songwriters. Scott of course is most well-known for penning such hits as “You’ll Never Leave Harlan Alive” (a personal favorite of mine, most famously recorded by Brad Paisley), Travis Tritt’s “It’s A Great Day To Be Alive” and the Dixie Chicks’ hit “Long Time Gone.”

Scott is not one of flash and fame, but one of the most well-respected and revered songwriters in country and Americana circles. It’s been four years since he’s released an album of new material and he now returns with new music that really isn’t new in age. In fact they’re over a decade old. According to Garden and Gun, in the early 2000s Scott “recorded 45 songs in the living room of his house on Nashville’s Couchville Pike.” After sitting for around 15 years in a vault, Scott picked 14 of the songs (nine written by him and five covers of who he considers his heroes) out for his brand new album Couchville Sessions. And thank goodness Scott never forgot about them because this album is a master class in songwriting.

The opening track, “Down to the River”, really sets the tone for the whole album. The folksy, down to earth tone combined with sharp lyrics like when Scott sings, “and we won’t give a damn if it’s rock, folk, country or blues” really makes it easy to get into. From the first listen it drew me in and you’ll undoubtedly be singing along with it. At the end of the song, Scott’s friend and fellow singer-songwriter Guy Clark tells an anecdote about finding a crow’s nest made out of barbed wire. It’s really surreal to hear the recently passed icon tell the story and makes for one of the coolest moments I’ve heard in a song this year. The soulful “Waiting for the Clothes to Get Clean” really shows off Scott’s smooth as silk voice. He just makes it sound so flawless. The song itself is about a troubled relationship, in the most part because the guy in it is an asshole. The bluesy guitars cut through the lyrics like a hot knife through butter.

“It’s Time to Go Away” is about a relationship coming to an end and the man realizing he’s leaving for all of the right reasons. It’s really hard to describe how great of a songwriter Darrell Scott is and this song is a perfect example. The story is simple, yet told so vividly you can picture the song in your head instantly. It’s just something you have to hear. Scott covers Johnny Cash’s “Big River” next. The song is about a man following his woman down the Mississippi River, as she seems to care more about living life down throughout the river than be with him. Scott definitely does the Man in Black justice with the cover. One of my favorites on Couchville Sessions is “Love Is The Reason.” The soaring instrumentation and Scott’s voice just mesh so well on this song about love.

Another cover on the album is Hank Williams’ “Ramblin’ Man.” Darrell Scott’s version is slower and more melancholy. Or to put it more bluntly, it’s pretty damn sad. It’s the kind of song you play after a brutal breakup and play while you sit in the dark and drink. That’s probably the way Hank would have preferred it too. Only the truly patient will want to sit and listen all the way through this nearly seven-minute song, but it is worth it. “It’s About Time” is perhaps the darkest song on the album. Scott deals with his own mortality and the legacy you leave behind when you die. As he explains on the song, he’s lived it all and when death comes he will be ready. But it shouldn’t be sad because from a fallen tree new sprouts will emerge. It’s the circle of life. The Celtic folk sound really jives well with the lyrics on this song. It’s yet another example of why Darrell Scott is so respected by fellow writers and artists.

This is followed by Scott’s cover of Peter Rowan’s “Moonlight Midnight.” Rowan himself joins Scott on the song and they sound great together. It’s the most rock-influenced track on the album and features some stellar electric guitar play. Scott pokes fun at radio DJs on “Morning Man.” This is evident by the lines about getting a fat man to laugh at his jokes and signing autographs at the mall. It shows Scott has a humorous side too and helps break up some of the more serious songs on the album. I know I got some good laughs. The icing on the cake to me is how Scott makes the song sound exactly like old morning radio shows bumpers; really light, catchy and even a call name. The romantic “Come Into This Room” follows and I just have to say it’s refreshing to hear a song striving to be romantic is actually romantic. After hearing so many hackneyed attempts at this by popular country artists, my ears almost forgot what a romantic love song should sound like. So I extend a thank you to Scott for redeeming my faith that these songs can still exist.

“Loretta” is the third cover song on the album and it’s by the legendary Townes Van Zandt. Scott really hits a home run with the cover songs he chooses and of course you never go wrong with a Townes song. When it comes to Van Zandt songs, you just need to hear them for yourself. The final cover song on the album is James Taylor’s “Another Grey Morning.” The song is about waking up and living out the same things each day. The woman in the song is so exasperated with the monotony that she thinks she would maybe rather have death over another grey morning. It’s a little extreme, but for anyone who has felt depressed, they could relate to the feeling. Couchville Sessions closes out with “Free (This Is The Love Song).” It’s what it says it is, as Scott sings a love song he probably should have sung sooner to a woman he loves. It comes from a man who has experienced life and realizes he’s made mistakes along the way and this is one he’s trying to amend. It’s another nugget of wisdom Scott imparts upon the listener.

Upon the very first listen of Couchville Sessions, I instantly connected with it and loved it. It’s like a long-lost friend you knew you never had and found again. If you’re not familiar with the work of Darrell Scott, just listen to this once and you’ll be blown away. The songwriting is fantastic and the instrumentation is pretty damn good too. The only thing I would say I don’t like about the album is it runs a tad too long at 14 songs, even though every single song is good. It’s hard to believe these songs have just been sitting around for 15 years. We can only hope we hear the rest of the 45 songs recorded in that same session. In the meantime I can’t recommend Couchville Sessions enough. You aren’t going to get too much better than this.