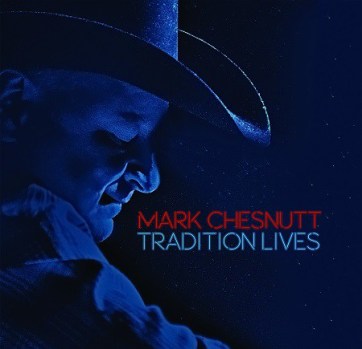 When it comes to music I’ve realized there are two groups of artists: those who make the music they want to and those who make what everyone else wants. In other words, who does and doesn’t compromise their artistic integrity. If you turn on country radio today, you’ll hear a lot of compromising. So obviously you won’t be hearing the music of Mark Chesnutt. Throughout the 90s you would hear Chenutt all the time until he was faced with the same dreaded compromise forced by a major label. This came in the form of his cover of Aerosmith’s “I Don’t Wanna Miss a Thing,” which he just revealed recently that he didn’t feel comfortable doing (his mentor and friend George Jones was angry about the cover too):

“As luck would have it, it ended up going to No. 1 hit for four damn weeks!” he says, bursting out laughing. But he maintains, “It didn’t sell anything. So I asked to leave the label, ’cause when it was time to go back in the studio, there was another pop hit they wanted me to cover. I said no, absolutely not. That made everyone at the label mad at me, and I got the reputation in town of being hard to work with. And once you get that label, then you’re pretty much done.”

Ever since then Chesnutt has been out on his own making music with smaller labels and playing lots of shows every year. Of course after an artist leaves a major label, it leaves the impression on casual fans that the artist has retired and faded into the sunset. That’s far from the case for Chesnutt as he returns with his first new album in eight years, Tradition Lives. It’s the culmination of years of writing and work that Chesnutt is quite proud of releasing to the public. And I have to say he should be beaming with pride, as this album is a true example of why artists should stick to their guns and make the music they want to make.

Chesnutt takes us back to early 90s country radio from the get go with “I’ve Got a Quarter In My Pocket.” It’s one of many heartbreak songs on the album, as Chesnutt schools us on the lost of art of country heartbreak tunes. The lamenting “Is It Still Cheating” tackles the complications of cheating partners. Written by Jamey Johnson, Randy Houser and Jerrod Niemann, the song begins with a husband listening to his wife leave yet another message on the answering machine saying she’ll be home late. He knows of course that she’s out cheating, but this is fine to him because he’s at home cheating on her. Both sides are lying and cheating, but the husband ponders if it’s really cheating. It’s a complex conundrum that leaves it up to the listener to decide. Either way I find it to be an intriguingly great song and one of the best on Tradition Lives.

The upbeat “Lonely Ain’t the Only Game In Town” puts me in mind of the dance halls down in Texas. The steel guitar and fiddle driven tune is about a woman feeling lonely, so she heads to where the neon shines bright and goes for a night on the town. In a perfect world, this song would be playing on country radio because I think it could have been a hit in the 90s (although there are several songs I could say that about on this album). “Oughta Miss Me by Now” sees a man wishing and hoping for his ex to realize she made a mistake ending their relationship. Keep in mind this isn’t from a vindictive point of view like many mainstream country artists would frame this type of song, but rather from a person who is heartbroken and having trouble moving on. It’s desperate hoping that he probably knows deep down isn’t going to happen. Chesnutt comes from the point of view of experience in relationships on “Neither Did I.” It sees an older gentleman bestowing advice to younger men on what happens in relationships and what to expect when it can hit the rocks. It’s not a bad song, but one of the more forgettable tracks on the album. I will say though I enjoy the instrumentation, as there’s plenty of fiddle and steel guitar throughout the song.

There are a lot of great songs on this album, but the best to my ears is “So You Can’t Hurt Me Anymore.” An always-present steel guitar throughout gives the song a reflective feel, as a man realizes he needs to break up with his woman so she can’t hurt him anymore. It’s not an easy decision after all they’ve been through, but he realizes he has to move on for his own sake. I should point out that the writers of this song are producer Jimmy Ritchey, Roger Springer and William Michael Morgan. It’s cool to see the latter’s name associated with this song, proving once again Morgan wants to carry on what artists like Chesnutt did before him. This is also the type of song that shows why Mark Chesnutt is far from being done in his career.

“You Moved up in Your World” is about a man reuniting with a woman who had left his hometown and made a life outside while he’s been living there the whole time. To the rest of the world she’s kind of a celebrity, while he still sees her as the woman he grew up and fell in love with. It’s a very bittersweet song, as you can tell the man never really expressed how he felt to her. Contrasting lives are put on display on “Look at Me Now.” A man sits in a hotel room in the dark and flipping through channels on TV while he listens to a new couple making love next door. He realizes what a mess he has become and is haunted by his past decisions that led to this situation. It’s a solid tune, where once again the traditional instrumentation really shines and hooks the listener in.

Another standout on Tradition Lives is “Losing You All Over Again.” Chesnutt once again delivers a classically great heartbreak song, with plenty of steel guitar. After listening to this album multiple times, it still doesn’t sink in how great Chesnutt is when it comes to these types of songs. It’s like secondhand nature to him and makes it look so easy. Today’s country artists would be wise to take note. Chesnutt lets his thoughts on the country music industry be known on “Never Been to Texas.” It’s not necessarily a protest song, but he pointedly calls out Music Row for saying people aren’t interested in drinking and cheating songs anymore. He refutes their claims by pointing to Texas as an example of real country songs being made. He also sings about how the steel guitar won’t ever die in country songs despite Music Row’s attempts to minimize it. It’s a fun song, both lyrically and instrumentation-wise. It also avoids the pitfalls of how cliché protest songs have become.

“What I Heard” welcomes the listeners with a warm melody that harkens back to better days in country music. The song is about a woman telling goodbye to her man with tears rolling from her eyes. To the man, what he heard was more than just goodbye. Rather he thinks that this is just temporary and that she’ll come back someday. He’s clearly in denial over the breakup. It’s refreshing to hear this type of song because so many male artists today come off as trying to look cool coming off a breakup (in other words trying to win it), whereas Chesnutt shows the more true feelings someone goes through (denial and false hope). The laid back “Hot” is one of the less serious songs on the album. Chesnutt sings about how hot it is outside, which at this time of the year in the United States is quite accurate (especially for folks down in the southern portion of the country). Just like “Neither Did I,” this song isn’t bad, but there’s not much to it. Tradition Lives closes with the subdued “There Won’t Be Another Now.” Chesnutt superbly covers the 1985 Merle Haggard song, as there’s a lot of heart behind his vocals. Chesnutt did it to honor not only the late legend Haggard, but also the writer of the song Red Lane who passed away. It’s another example of the deep respect he has for all the artists that paved the way for him. I would suggest listening to both Haggard and Chesnutt’s versions. It’s a fantastic and classy way to conclude the album.

Mark Chesnutt really impresses me with Tradition Lives and reminded me of why I was such a fan of his music growing up as a kid. I have to admit I was unsure of how good this album would be, as I’ve been disappointed by some recent releases by veteran artists. But Chesnutt clearly still has his “fastball” and sounds just as great as he did when radio played him. For some fans, this will be their favorite album of the year and I don’t blame them. This album is full of wonderful heartbreak songs, as well as some fun tunes too. If you loved 90s country or are just someone who appreciates traditional country, you need to check this out. Tradition Lives without a doubt lives up to its name, reminding us all that traditional country will never fade away.