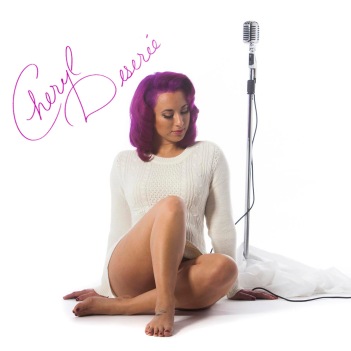 Many times one of the problems I find when looking at up and coming independent country artists is the lack of originality. In other words they do nothing to stand out and be different from the rest of the crowd. The music can sound fine, but if it reminds me of another artist who can do it better than you, I’m not going to have much interest. When it comes to newcomer Cheryl Desere’e, I can’t think of another artist like her today. In addition to being an artist, she’s a pin-up model. But she also likes to incorporate heavy jazz and swing influences into her country music. Together it makes quite an intriguing sound, so I had to dive into her self-titled debut album. The result is an album full of great happy and sad songs, all featuring some stellar instrumentation.

Desere’e begins the album with “Pillow Talkin’” and right away you get a real taste of the western swing influenced country you’ll hear throughout this album. There’s lots of fiddle in this contemplative love song. This is followed by “Cactus Flower,” a song about a woman’s upbringing in small desert town out west. It wasn’t a pleasant one, which sent her off chasing something more than what that little town could offer. It’s very much in the vein of Kacey Musgraves’ takes on small town living. “Diamond Valley R.V.” sticks with a distraught theme, as the song is about living in an RV and the struggles that come with it. The mother has to keep her valuables in a mini-storage place because there’s no room for it on the RV and she struggles to pay for the storage month to month. This is a reality for many people and I think the song captures the theme perfectly.

The jazz influenced “Stage Door Jenny” follows. Noticeable horn play shows up throughout the song, along with a rollicking piano. Many oppose horns in country music because of (stupid) purist reasons. But when incorporated well it really works and this is an example of it working. The sultry “Keep My Name Off Your Lips” shows off Desere’s sassy side. The song is about a woman telling another to basically shut up and stop talking trash about her. Now a lot of people would call this catty, but to them I call bullshit because if this were about two guys people would have no problem. The sharp lyrics accompanied by some smooth horn play really make for one of the best songs on the album. “Rabbit Hole” is about a woman struggling to get over a breakup. She wonders if he still thinks of her and will ever come back to her someday. The instrumentation really shines on this song, especially the heavy pedal steel guitar that rings throughout.

One of the highlights of the album is definitely “Loving Beyond My Means.” Very much in the classic country vein, the song is about a woman wondering if she’s loving beyond her means. She loves the man she’s with very much, but also contemplates the thought of freedom of being on her own. The lyrics do a great job of capturing the conflicted feelings of the song. “Last Night’s Face” is along the same lines of “Stage Door Jenny,” featuring a lot of catchy jazz leaning instrumentation. Desere’e takes on immaturity on “Sin Eater.” It’s about a woman getting fed up of a guy treating her wrong and walking all over her. Instead of leaving though she continues to crawl back to him and blames herself. This is actually a very common mindset of domestic abuse victims. I’m not sure if this is what Desere’e was going for here, but if she was the song captures this dark side of bad relationships well.

“Wildfire” features the best vocal performance from Desere’e on the album. It comes on perhaps the deepest song of the album too, as it’s about a little girl in the hospital with an irresponsible, stoner parent. It’s an alluringly sad song that grasped my attention from the first listen. The song really shows the depth and range of Desere’e as an artist. The penultimate song of the album “Eye Candy” is about Desere’e warning guys that they can’t handle her and that all she’ll ever be to them is eye candy. The song sees Desere’e addressing something I imagine she gets a lot from fans at her shows. I like to think this is her subtly nice way to telling a fan who has any ideas of trying something with her to back off, as looking is as far as it will get. Desere’e closes the album out on a duet with Benjamin Douglas on “Don’t Look Now.” It’s one of the quieter tracks of the album, but also one of the best. Desere’e and Douglas sound excellent together and really close the album out with a bang.

It’s very easy for the casual observer to take one look at the album cover for this record and dismiss Cheryl Desere’e as another artist with a pretty face and bad songs. They would be an absolute fool, not only to objectify an artist on looks, but for missing out on some pretty good music. Desere’e is a pretty damn good vocalist and shows a lot of range throughout the record. She can tackle the fun songs and serious songs with impressive vigor. The instrumentation really shines on this album too and makes for an enjoyable listen on each song. While I don’t think this represents the best Desere’e has to offer, it’s a good start and it shows she has a ton of potential.