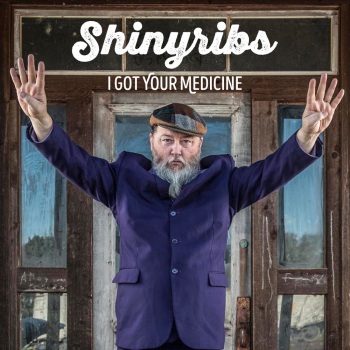 Standing out above the crowd. It’s something I constantly stress about new and upcoming acts. The best way to get your music noticed and be remembered is to be different. Of course you should also be yourself. Shinyribs is a group that embodies both of these things. They are not a new group, but I had honestly not been aware of them. It was buzz that made me go check this group out and reading about them immediately intrigued me. The group is led by veteran musician Kevin Russell, who started the group in 2007. He self-describes the band’s sound as “country soul” and “swamp funk.” The band is known for its fun shows, where Russell frequently dances on stage and even features conga lines through the crowd. Certainly not a common aspect of a country show, but this made me immediately want to dig into Shinyribs’ new album I Got Your Medicine. And I’m sorry I didn’t find this group sooner because they are fantastic. They’re a boatload of fun (fun is a word you’ll see a lot through this review).

The album’s title track is a jovial, organ-driven track with a good dose of horns too. The instrumentation is instantly fun and catchy, a precursor to the rest of the album. “Don’t Leave It a Lie” really shows off Russell’s big, soulful voice, as well as the rich instrumentation once again. The throwback “I Gave Up All I Had” features one of the more serious moments of the album. It’s about a man whose hard luck when it comes to love comes to an end when he falls in love with a woman. This is thanks to him earning the love and respect of her four children and treating them as his own. It’s a real feel good song. The twangy “Trouble, Trouble” is an instant toe-tapper and will get you moving your feet along on the very first listen. I can imagine there’s a lot of dancing for this one at Shinyribs’ shows, but then again what song can’t you dance to on this album? You know you’re in for something fun with a song title like “Tub Gut Stomp & Red-Eyed Soul.” The piano play, guitars and the horns go together perfectly to create a real infectious sound. “I Knew It All Along” is a soulful love waltz that’s a great breather after some real energetic dance tracks.

One of my favorites on I Got Your Medicine is definitely “A Certain Girl.” It recalls a sound from the height of rock and roll in the 60s, as it’s your classic kiss and don’t tell song. An underrated aspect that makes this song so great are the drums, as real and live drums are so satisfying to hear after listening to the drum machine parade on mainstream radio. Shinyribs nail another waltz in “Nothing Takes the Place of You,” a song about a man realizing he can never replace the love he’s lost. The horn play on this is flat-out awesome and it’s just an all-around great song. “Hands On Your Hips” is probably the most fun breakup/cheating song I’ve heard. It’s about a man seeing his woman’s lips on another man’s foot and his hands on her hips. I have to say this is the first country song I’ve heard about foot sucking, but it’s oddly great. There is many fun moments on this album, but the most fun has to be “I Don’t Give a Shit.” It’s a love duet where both sides don’t give a shit about the other, as they say they’re a match made in hell. But deep down they belong together. It’s just so enjoyable and you’ll find yourself instantly singing along to it. Think of it as a modern, more light-hearted version of “You’re The Reason Our Kids are Ugly.”

“Ambulance” is another song where Shinyribs takes a usually grimmer subject and makes it enjoyable. It’s about a man waking up in an ambulance and wondering how the hell he got in it. Never has riding in an ambulance been so catchy. The album closes with another instant feel good song, “The Cross Is Boss.” It’s probably the most enjoyable spiritual/religious song I’ve heard in a while, as Russell sings of Jesus paying the ultimate cost and preaching happy thoughts. Instead of being preachy or falling into cliché territory, the song simply gives thanks and focuses on being positive, which is what I wish more of these songs did. I give Shinyribs a lot of credit for making a spiritual song not only enjoyable, but also appropriately uplifting.

Shinyribs’ I Got Your Medicine is one of those albums that just makes me happy. It’s really what music is all about: making you feel something. I wish there were more groups like Shinyribs who followed their vision and executed it with such tactfulness and honesty. Shinyribs doesn’t play by the “rules” of genres and fit into people’s contrived boxes. Instead they just create what they want and those who want to join the party are welcome to come along. The instrumentation and musicality of this band rank amongst the best. Shine on Shinyribs and never stop being you.

Album Highlights: I Don’t Give a Shit, A Certain Girl, Tub Gut Stomp & Red-Eyed Soul, The Cross Is Boss, I Gave Up All I Had, Nothing Takes the Place of You

4 thoughts on “Album Review – Shinyribs’ ‘I Got Your Medicine’”