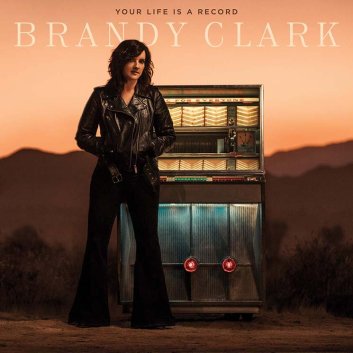 Brandy Clark’s last album Big Day in a Small Town initially really impressed me, but eventually I found it to be a slightly above average album. And one of the big reasons was the production was all over the place. It just lacked cohesion and I also felt Clark didn’t do enough lyrically to elevate the tired small town themes of country music. So coming into this new record I was a bit unsure of what to expect, although with Jay Joyce returning as producer I continued to expect different sonic choices. And that definitely is the case with this album. But Your Life is a Record is also a much rawer and more personal record from Brandy Clark, which I would argue is definitely beneficial to this album.

Opening track “I’ll Be the Sad Song” lets you feel right away the pure somberness that fuels much of this record (Clark broke up with her partner of several years, inspiring many tracks on this album). And a big part of what helps drive this feeling is the sweeping and gorgeous strings throughout the chorus. It fits the reflective nature of looking back on a lost relationship really well. There’s no bitterness or anger, just a sad realization of what will never be again. “Long Walk” is on the other end of the spectrum, a fun sing-a-long that wishes bad things upon a person you don’t like. The kicker lines of course are “So take a long walk off a real short pier/Take a cinder block with you as a souvenir.” Out of the context of the song this is overly dark and vengeful. But the playful melody and Clark’s tongue-in-cheek delivery make for a whimsical, silly response to a person who’s clearly agitating.

“Love is a Fire” is a smoldering love song that shows off Clark’s passionate side and to excellent effect. I really enjoy the spacey, drifting feeling created by the strings and piano. The lyrics do a great job of painting that imagery of love being this blazing, out of control fire in the listener’s head too. “Pawn Shop” shows how vivid of a storyteller Clark can be, as she tells the duel stories of a woman pawning off her wedding ring and a man pawning his guitar. Each reflect on the loss these items represent and the ending of dreams. But then Clark reminds you that somebody else will buy them, starting dreams anew for somebody else. It’s a really clever look at the duality of life and death, how each are constantly playing off each other and how each gives the other value.

“Who You Thought I Was” is about striving to be a better person after falling in love with someone. The bouncy juxtaposition of the horns, mandolin and flute gives the song an enjoyably fun melody. As for the lyrics, they’re solid, clearly getting across the change in heart of the person who’s fallen in love. “Apologies” has an enjoyable flute and horn section, but the song meanders too long for me. It just feels like this song never leaves second gear and doesn’t ever reach anywhere with it’s message. The lyrics just sort of glaze over you after a couple of listens.  Randy Newman joins Clark on “Bigger Boat” and I just have to be flat-out honest: I do not like Newman’s voice. It annoys the shit out of me. The song has an admirable aim of pointing out the absurdity of the disagreements that run through social media and society nowadays. But it’s just too hokey for my taste. That’s a shame because I do enjoy the production on this track.

I have the same issues with “Bad Car” as I did with “Apologies.” And the other thing that bugs me is I feel like I’ve heard this song done so many times in country music. There’s just nothing that stands out to make it different from every other song that personalizes and gives emotional meaning to a vehicle. It’s not a bad song per se, it’s just fine and I won’t remember it. “Who Broke Whose Heart” fortunately does not have this problem. In fact this is probably one of my favorite songs I’ve heard from Clark, as it’s instantly catchy lyrics and melody hooked me. The production actually reminds me of Electric Light Orchestra in the way it utilizes the strings, horns and guitar. It’s just a really fun song with a surprising amount of bite.

“Can We Be Strangers” is a devastatingly great heartbreak song. This relationship has soured to the point of where the narrator just wishes they had never even met each other in the first place. And the way Clark delivers the chorus is painstakingly and soulfully beautiful. The horns and strings perfectly complement this song too, not taking over and instead adding dramatic gravitas that only enhances the emotions. “The Past is the Past” wraps the album up in a nice bow, with Clark reaching the point of letting the past go and moving forward in her life while still letting herself feel the heartbreak from the situation. As I said it’s a fitting and mature conclusion after the myriad of emotions Clark expresses throughout the album. Lessons have been learned and now a new life begins.

Despite a few hiccups, Brandy Clark takes a big step up from her last album with Your Life is a Record. I think the production is the biggest improvement, as it flows together really well from start to finish. I really enjoy the incorporation of the flutes in this album, as it’s something not really utilized as much in country music. The songwriting stumbles in a few spots, but for the most part is pretty good and at times great. There’s a surprisingly nice mix of emotions on an album centered around a breakup too. Most importantly, Clark rewards you for listening to the whole album, giving you the emotional journey with the fittingly positive, yet realistic destination.