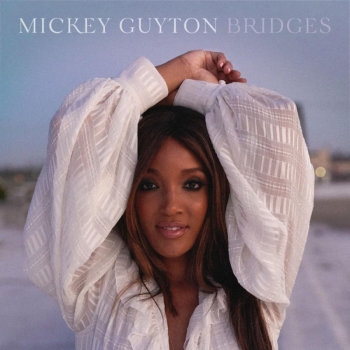 Onto her new EP Bridges, Guyton picks up right where she left off with her self-titled EP. Opening track “Heaven Down Here” sees Guyton seeking mercy and answers from God for a world that she sees has gone awry. It’s catchy, it has a good message and Guyton is able to showcase her dynamic voice. And even though the nature of the song is somber, it focuses on finding answers and hope, something that is relatable to anyone who is listening. “Bridges” continues this message, a song that strives and urges people to stop fighting and start building bridges instead. I really enjoy the energy of this song, as it’s uplifting and infectious. The lyrics are also grounded in realism (avoiding the cheesiness and “ra ra” of many songs of this nature) with lines like “We’re gonna need more than prayers and wishes” and “It’s gonna take way more work to fix it.”

“What Are You Gonna Tell Her?” is an absolutely devastating and honest song about the cruelty and unfairness of the world. Guyton explores the feelings of herself, as well as other young girls who grow up with aspirations of making it in music and finding out the crushing reality that comes in trying to realize these dreams. She painstakingly outlines all the unfair barriers placed around women and most importantly does not answer the question posed, but leaves it to you the listener to grapple with the answer. Guyton’s voice is absolutely unleashed in this emotional song as it should be, as it’s one of the biggest statement songs of 2020.

Guyton steps away from social issues on the next songs “Rosé” and “Salt.” They’re notably not as good as the social issue songs, which is an actually an odd thing for me to point out as usually it’s the other way around nowadays (as I’ve said numerous times, the majority of artists who tackle social issue songs completely miss the boat in terms of song quality). “Rosé” is about loving the pink-tinted wine and it falls along the lines of most drinking songs you hear in mainstream country music. But I appreciate Guyton’s blunt confession when she sings the line: “You can call it what you want, but everybody loves a good cliché.” She’s exactly right, as the majority of country music listeners eat songs like this right up (whether this is to blame for radio or the audience’s preferences, that’s for you to decide).

The same can be said of “Salt,” a song that is a cautionary warning to guys to avoid women who only want to use them. Guyton kind of flips the script here, as there are numerous songs about guys warning women about guys who use them. While it’s one of my less favorite themes in country music, the bluesy instrumentation and Guyton’s charismatic vocal performance carry the predictable lyrics to a good performance. The EP closes out with “Black Like Me,” a song I highly praised in my single review of it. As I said in my review, I’ll say it again: this is one of the most important songs you’ll hear this year and it should be a milestone moment in country music.

Mickey Guyton once again delivers a great EP with Bridges. Her voice is still one of the best in country music and she takes her songwriting to whole new level with songs that explore deep and complicated issues that many often try to avoid in their music. But Guyton doesn’t have the convenience of running away from these issues because she lives these issues and has to face them everyday. Country music is said to be about everyday people and their lives. Bridges and Mickey Guyton couldn’t fit this definition any better.