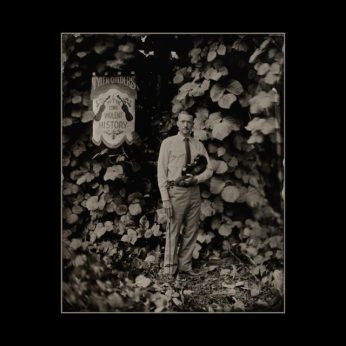 The best surprises are not what you want, but what you need. Tyler Childers’ surprise new album Long Violent History is a record we needed. It’s easy to dismiss upon first glance for many because it’s an album that’s 90% instrumental music. It’s an understandable take that I at one time would have agreed with, but I’ve learned to gain a new appreciation for instrumental music in recent years. In fact I’m pretty sure I’ve listened to and reviewed more instrumental music in 2020 than all previous years combined.

The key to great instrumental music over the course of an album is variety and conveying mood within the listener as they listen to it. One of the big flaws I find with a lot of instrumental music is an insistence on perfection of the instrumentation, as this actually strips away the humanity of the sound and makes for a sound that is too sterile. It’s essentially elevator music. Instrumental music needs to have a rich tone and identifiable texture, especially when it comes to old time, Appalachian fiddle music like this.

So with all that mind, the novice experience of Tyler Childers when it comes to the fiddle is not really a hinderance for him on Long Violent History. It’s a more of a benefit, as this causes a greater focus on the music sounding good. Yes, if you handed this music to an Amanda Shires or Jimmy de Martini, they probably would “sound better” and hit the notes more precisely. But your average listener of this album wouldn’t be able to discern the difference between Childers’ playing and the best. So your enjoyment of the instrumental portion of this album will come down to how open minded you are toward this type of music and how much stock you put into precision of instrumentation.

For me, the instrumental songs on this album are highly enjoyable. The best way to experience them too is with a set of good headphones, as you can pick up all the little details. Childers dropped this album at the perfect time of year too, as the backdrop of colorful trees and a crisp autumn breeze suit these songs well. I would also be remiss if I didn’t mention that Dom Flemons and The Pickin’ Crew are part of this album, as their contributions are most certainly as important as Childers’ fiddle playing to what makes this album sound so damn good.

The gentle plucking of “Send in the Clowns” that begins the album is such a warm and inviting sound that grabs a hold of you and doesn’t let go. The frenetic “Squirrel Hunter” creates a feeling of excitement and adventure. I swore I’ve heard this in a video game I’ve played before, but I can’t quite put my finger on it. Hearing “Sludge River Stomp” on headphones for the first time made me do a double take, as it’s heavy and pounding background made me believe somebody was beating on my floor. It’s fantastic. I guess that’s the sound one should expect with a song title like this. The fluttering and melodic “Midnight on the Water” just showers right over you and “Bonaparte’s Retreat” provides that final frenetic burst of fiddle to build up to the album’s concluding climax.

The concluding song, the album’s title track, is what ties all this together and is ultimately what makes this album brilliant. Very rarely does one look at an album and determine that one song is what defines it. But I can’t name another album off the top of my head that utilizes the concept Tyler Childers uses with Long Violent History. In a way I look at the first eight instrumental songs as the prelude to the album itself and “Long Violent History” being the album. Childers could have easily cobbled together a few more songs and made an EP to tide listeners over. He could have just done an instrumental album too. But instead he very deliberately gave us an album with this unique presentation and I can’t help but marvel at the execution.

It all hinges on one song being excellent and “Long Violent History” exceeds this expectation. Many songs that try to cover the current racial and political strife that dominates the headlines and our attentions in this country fail to be great because they want to tell the listener how to think when instead they should invite the listener in with the music and let them draw their own conclusions on the message. We don’t need more agendas, we need honest discussions so bridges can be built. The only agenda in this song that can be found is a plea for empathy and understanding. This is a universal message that makes you think and look within yourself.

In just over three minutes Childers manages to cover a lot of aspects, from the long history of race issues and protests to the fake news and arguing that swirls everywhere you turn today. Childers then turns back to himself, essentially admitting ignorance when it comes to the unfair and brutal experiences of African Americans and instead just shares his experience as an often discriminated and misunderstood person from Appalachia (As someone who is also from Appalachia, I applaud Tyler for continually standing up for our region and showing that we’re not a hillbilly monolith). What’s so smart about this is how he doesn’t use his own struggles and problems as a measuring stick in a misery contest against the problems facing African Americans in this country (nor does he try to equate them in any way, only acknowledging them as a frame of reference), but instead uses it as a perfect analogy to better explain to people like him who may not understand what the protesting is all about. It’s about finding common ground so we can understand each other.

This all sets up the fantastic lyrics that hit the heart of it all, the invite to the listener to empathize: “In all my born days as a white boy from Hickman/Based on the way the world’s been to me?/It’s called me belligerent, it’s took me for ignorant/But it ain’t never once made me scared just to be/Could you imagine just constantly worryin’/Kickin’ and fightin’, beggin’ to breathe?”

Childers spells out clear as day what the issue is better than I’ve heard from any other song this year. And it’s not even that I haven’t heard other songs do a good job of this. But none have spoken to me like this one. Furthermore, he emphasizes how if the police did this to the people who live in Appalachia what they do to African Americans in this country, they would react in the same way many are in this country over the racial inequality that has taken place. Childers then wraps it up perfectly relating back to the beginning of the song how violence and injustice has an awful, long history once it begins and it usually results in being forced to live in an uncomfortable reality.

Who would have predicted an Appalachian country album filled mostly with old fiddle standards would end up being one of the best albums of 2020? But that’s exactly what Tyler Childers delivers with Long Violent History. It’s eight great instrumental songs with beautiful and thoughtful melody packaged around one of the most powerful, well-written songs of this generation. Tyler Childers writes himself into the history books with this album.