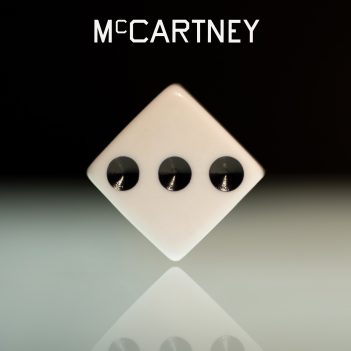 Sir Paul McCartney is without question one of the greatest songwriters of all-time. The songs John Lennon and McCartney wrote influenced every artist that came after them. I should mention McCartney is also my favorite Beatle, as his excellent storytelling and ear for beautiful melodies is what in my mind makes him the best of The Fab Four. His strong solo career after The Beatles only reinforces this in my mind (although Harrison has the best solo album of the four with All Things Must Pass). And the fact that he’s still making music at 78 years old after all he’s accomplished makes me marvel. So anytime Paul McCartney makes music, I’m going to appreciate it, regardless of it’s quality.

If you’ve listened to his previous McCartney albums, you know he likes to get a little weird on these albums. McCartney served as his debut album and it was largely panned by the critics because it was just so odd and different from The Beatles (with the exception being “Maybe I’m Amazed”). But with time people have come to realize how groundbreaking this album was, as it was basically the first indie pop album and it went sharply against the grain of the “wall of sound” that was becoming popular. It was unheard of before this for an artist to do everything on the album by themselves (his wife Linda of course played a big part in that album too) and it’s what distinguishes this series of albums for McCartney. McCartney II pushed the envelope by embracing synthesizers, as this was right before synths became a big trend in pop music in the 80s. So I was expecting something different with McCartney III in tradition with the previous two albums. And he delivers something different.

McCartney said he made this album simply out of boredom during “Rockdown” (his cheeky dad joke on the term lockdown) and while the rawness of this one-man effort shines through, the thorough fullness of the songs makes this feel like something that was more carefully orchestrated. In other words, McCartney can screw around and make a better album than most people can spending years trying to craft a record. I shouldn’t be surprised after laying out above while he’s one of the best. McCartney really surprises me, as he experiments even more than I thought he would on this album and for the most part he pulls off his creative rolls of the dice really well. It’s not amongst his best work (the bar is pretty damn high), but I think it’s a step up over Egypt Station and I would put it amongst his top five best solo albums.

My attention is immediately grabbed with opening track “Long Tailed Winter Bird,” an upbeat, jangly and acoustic-driven melody. It’s got a richly hypnotic feel, as McCartney cryptically asks if you miss him, a reference I’m sure to isolation during quarantine. A really simple track, but quite effective. Also I think he’s the first person I’ve ever heard playing the recorder and I’m not reaching to plug my ears, as it strangely fits the feel of the song. It’s an ideal opening track, as I’m immediately intrigued and want to hear more.

“Find My Way” is an optimistic ode to always being there for someone, even in these anxious, uncertain times. I would point to this song as another example of why I appreciate McCartney so much as a songwriter: he can write excellent happy songs. One of my biggest pet peeves with critics and more critical music fans is the incorrect notion that only dark songs can be considered deep, high-level songwriting. The idea that sadness is a required ingredient in a “serious” song is absolute trite. Sad songs have become just as predictable as the naively optimistic music that populates playlists and radio. I prefer a happy medium in-between. So McCartney’s tendency to be more “groundedly” optimistic and happy in his songs naturally draws me to his songwriting.  “Women and Wives” is an even better example of this. It’s about being determined and always striving to move forward in life, even when the “laughter turns to sorrow” and that it’s important to pass along what you know to the next generation to help in their own path in life. The moody piano really fits the lyrics too, as it feels like the soundtrack to taking a great journey (quite apt for a song about life).

“Pretty Boys” appears to be McCartney’s sarcastic commentary on the plastic faces you see in television and magazines. He muses there’s a lot to look at, but not much substance. This is probably my least favorite song on the album, as the musings are a bit amusing, but not as interesting as other songs on the album. The alliteratively titled “Lavatory Lil” makes me recall to mind “Polythene Pam” with it’s name choice. And I don’t who this is about, but she pissed off McCartney. He warns throughout the song of a “harlot” strung out on pills and sleeping around. It’s basically a diss track and a fun one to singalong with. The aggressive and punchy guitars are also appropriate on this smack-talking track.

The meandering and dream-like trance of “Deep Deep Feeling” is a real highlight, as McCartney gets real experimental and plays around. He really lets the song breathe and wander around, kind of a like a lost trip through a maze as the lyrics explore the tugging of emotions of someone in love. McCartney’s aged voice lends well to the mystical atmosphere created by the production too. This part of the album is where McCartney really hits his stride, as “Slidin'” is a fun, heavy rocker. McCartney again plays into psychedelic sounds, appropriate as this song seems to be about being high and having an out-of-body experience. The crunchy guitars are the key to this song, as they’re infectious to the ears.

“The Kiss of Venus” is a stripped-down love song about being captivated by your partner’s kiss. When it comes to these more saccharine McCartney songs, it’s hit and miss for most listeners, including myself. You either love it for it’s innocent sweetness (“Ob-La-Di, Ob-La-Da” and “Got To Get You Into My Life”) or as John Lennon once said, it’s “granny shit” (“When I’m Sixty-Four” and “Wild Honey Pie” for me). Fortunately this falls more into the former for me. The harpsichord is also a nice touch in the bridge. “Seize The Day” is about discovering an optimistic way of thinking after having love open your eyes. As McCartney wisely laments, you’ll wish you had a better attitude when bad times arrive. It’s another well written message about striving for optimism.

“Deep Down” is very much in the same vein as “Deep Deep Feeling.” It’s a long and mesmerizing track that takes it’s time. The drums and horns give it a commanding, catchy melody and the lingering mellotron chews up the scenery in a good way. I enjoy how McCartney experiments with his voice throughout, changing his tone and octave. He’s not really sure where to settle, but it works in a strange way that’s hard to put my finger on. Of course if you’ve listened to outtakes on the various albums of The Beatles, you know McCartney has always been a bit of a perfectionist when it comes to his vocals (really his music in general) and he likes to play around with them.

McCartney does a quick reprise of “Winter Bird” before giving way to “When Winter Comes,” which has an interesting backstory. McCartney originally recorded it in 1997 during the sessions for his album Flaming Pie with longtime Beatles producer George Martin. He decided to give it new life on this album rather than burying it as a B-side on the deluxe version of Flaming Pie. I applaud this choice because it’s a great song. It’s got a smooth, easy-going melody as McCartney muses of the surroundings of his farm. I particularly enjoy the lyrics about planting trees so someone may enjoy their shade one day and fixing a fence so some foxes won’t make the chickens and lambs uncomfortable. They perfectly fit the theme of this album of always striving to give back to the world around you, even through small gestures to some animals to poking around your farm.

McCartney III is a wonderfully solid album from Paul McCartney and while it may not be everyone’s cup of tea, those who enjoy the songwriting of McCartney will find plenty to enjoy. This album also continues the fun weirdness of the McCartney albums, as this fits right in with it’s predecessors. I would put this amongst my top 20 albums of 2020 and hopefully this is not the last album we get from the legendary McCartney. Because he clearly still has a lot of creativity left in the tank.