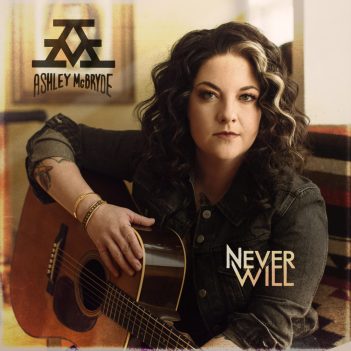 Ashley McBryde’s major label debut album Girl Going Nowhere was truly one of the most underrated albums of 2018. Unfortunately it was released at a bad time, as Kacey Musgraves’ Golden Hour released on the same day along with several other high-profile releases at the time. So it felt like that album and McBryde never got the proper attention and respect. But one thing I definitely took away from that great album was one day McBryde would release an album of the year level record. Well I didn’t think it would happen so soon, but that’s pleasantly the case with her follow-up album Never Will.

The album greets you with heartland rock guitars on “Hang In There Girl.” And I’m so glad she leans more into this sound on the album, as it fits her like a glove. The opening song is an anthem for young girls stuck in small towns with big dreams, telling them to hang on through the hard times until they reach their goals one day. It’s an uplifting and very real message that I imagine will resonate with so many young girls across the midwest of America. Lead single “One Night Standards” shows the excellent storytelling abilities of McBryde, as she vividly tells the story of a one-night stand involving a married man. It’s brutally honest about the nature of the situation, painting both of the people in the story in an appropriately not positive light. It also details the justification of the action’s of the woman in the situation, which is flimsy. But that’s how it’s supposed to be, as the line is blurred between who she’s really trying to convince: him or herself.

“Shut Up Sheila” is an interesting song about a family going through the difficulty of watching a woman’s grandmother dying, only for a “friend” named Sheila to be butting in with unnecessary comments. The overall theme centers around pushing back against judgmental people and standing up for doing things your way. And while I love this message, what really makes this song stand out is the sound. Jay Joyce centers it around a spacey, echoing sound that gives it an ominous feel before giving away to roaring guitars that really put an exclamation point on the song. “First Thing I Reach For” is classic country gold in every way, from it’s steel guitar-driven sound to the timeless theme of overindulging in vices. I particularly enjoy the line, “Another night of bad decisions/There’s one still laying in my bed/The bastard in me wishes/That he’d woke up first and left.” It’s both humorous and memorable.

“Voodoo Doll” has quickly become a favorite for me and for two reasons. One because I love the way it’s written and the amount of intricate details given to a woman being made to feel like a voodoo doll watching her man cheat on her. Two because the production matches the dramatic, whiplash feel of the lyrics with McBryde delivering the type of fiery vocal performance that once again makes me thrilled that there are more rock influences on this album. The guitars absolutely roar, I love the little mandolin interludes and it’s an absolute blast to sing along with the chorus. “Sparrow” is on the other end of the spectrum, a soft and somber song about the cold realities a musician experiences traveling on the road. While McBryde acknowledges the exhilaration of realizing a dream, it also comes with missing your loved ones. Once again I applaud McBryde for both her honesty and genuine heart that shines through in the lyrics.

“Martha Divine” is another rock-driven track, this time a cheating/murder ballad interestingly told from the perspective of the daughter witnessing her father in the middle of misdeed. Fueled by infectious and thumping drums that get the heart pounding, the daughter vows to hunt down and kill the mistress, Martha Divine. Which by the way the name is clever and appropriate in itself, playing on the Aramic meaning of Martha, which is mistress, and divine, which means relating to God (the daughter in this case seeing her interference as a god-like act). And yes the daughter is flawed for only going after the father, but the daughter is going to naturally have an emotional blindspot for the father. The song also wisely avoids endearing us towards these violent actions, but rather gives a neutral window look in.

McBryde goes back to classic country storytelling on “Velvet Red.” It’s about a forbidden love affair between a poor maker of wine and the mayor’s only daughter, resulting in a daughter who would be nicknamed after the very wine her unknown father made. Not only is this storytelling on point, but I love the surprise reveal at the end that the daughter is telling the story of her parents conceiving her. I don’t mind the filter the vocals are being put through either, as it doesn’t hurt the song. “Stone” is the most emotional moment on the album, as a woman comes to grips with the death of her father and realizing how similar they were, despite their rocky relationship. The song doesn’t shy from the complicated nature of the feelings involved and that’s why I enjoy the storytelling of McBryde. It feels real and truly resonates with the listener as a result.

The album’s title track is pure heartland rock, with it’s “Dancing in the Dark”-like guitars perfectly texturing this never-give-up anthem. It’s autobiographical, as McBryde recalls all of the doubters along her journey and how she never gave into this negativity. Personally I really connect with the lyrics, so it’s easily my favorite on the album. Also if McBryde wants to make a straight-up rock album, I’m totally down for it because she just gets the ethos of classic rock. McBryde makes a quirky and fun choice to close the album with “Styrofoam.” Unlike anything she’s ever released before, it’s bouncy, light-hearted track about her love of styrofoam cups and features her doing spoken word through like half of it. And I thought I would dislike it, but I love it. Usually these type of gimmicky songs grind my gears, but I enjoy the history lesson at the beginning and it serves as a nice dose of casual fun to balance out the serious moments on the album. Because as I’ve said before, we don’t need to be serious all the time.

Ashley McBryde delivers exactly what I had hoped for and then beyond with Never Will. She leans heavily into her natural heartland rock sound and combines it with traditional country to create an album I will remember for a long time. The songwriting is brilliant and varied, running the gauntlet of emotions and most importantly I think Ashley McBryde delivers a flawless presentation of flawed characters. They’re never framed as likable, but real and as they are, which can be hard to get behind as a listener. But just like Sturgill Simpson’s SOUND & FURY, it can be understandable to not want to listen to music about such real and flawed characters, songs where there are no heroes even. For me though this is the music that is truly intriguing and has a lasting impact.

That is why I believe this is one of the best albums you’ll hear in 2020 and maybe the best country album of the year.