This is the monthly recap post of all the great music we reviewed on the blog in case you missed it or just came across our humble, little blog. So check this music out if you haven’t already.

Rob Baird – Wrong Side of the River 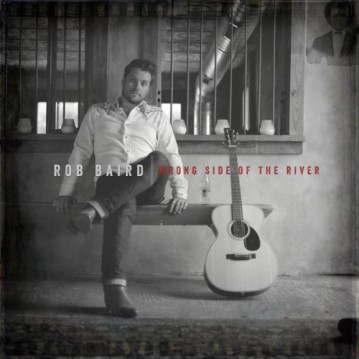 One of the things I pride myself on is keeping up with all of the best artists in country and Americana. I do my absolute best to review and cover all of the best and yet there’s always some artists that fall through the cracks. There was one artist in particular I kept hearing about from readers and around the independent country community. I’ve been wanting to cover him for a while and with the slow down in releases this month I finally get to. That artist is Rob Baird. Hailing from Memphis, Tennessee, he started out in 2010 with Carnival Recording Company founded by Frank Liddell in Nashville. After releasing two albums under this label, he’s now on his own. Baird released his third studio album earlier this year titled Wrong Side of the River. For this album he got outside of the Nashville bubble and headed west to Austin, Texas for inspiration. And I have to say the Red Dirt influence shines bright on this album.

You can really hear the Texas influence from the start on “Ain’t Nobody Got a Hold on Me.” A prominent guitar gives the song a real catchy melody throughout and really allows Baird’s voice to shine. It’s a subtly smooth song that draws the listener right in. The steel guitar-laden “Mercy Me” sees Baird tackling heartbreak. He questions why he runs and the things he’s done in his life, holding him back from finding love. And I did mention there’s a lot of steel guitar? If you love steel guitar, this song has plenty. “Pocket Change” has a more hard rock influence about it. It’s another heartbreak song and features some of the best instrumentation on the album. The roaring electric guitars and the lingering organ in the background really make for some fun music. In other words, it fits perfectly in the Red Dirt scene.

The quieter, subdued “Run of Good Luck” shows a softer side to Baird’s voice. The song is about a man and woman knowing it’s time for them to leave their town of Abilene and “roll the dice” in their lives. They know what they’re doing is a risk, but at the same time they don’t have much to lose either. This is definitely one of the standouts of Wrong Side of the River, as Baird’s vocals and the instrumentation blend together perfectly. The album’s title track begins with some eerie guitar play, giving the song an almost psychedelic feel. It’s one of the most intriguing openers to a song I’ve heard this year. The whole song really features some stellar instrumentation. If there’s one thing this album just nails, it’s this aspect.

The outro for “Wrong Side of the River” bleeds right into “Oklahoma.” Baird sings of the traveling musician being on the road and feeling lonely without the woman he loves in his life all the time. He wishes she was with him and that they weren’t apart all the time. It’s a pretty solid track. Baird draws upon his experiences as a rancher out west on “Horses.” The song is about how he watches the horses live and makes him ponder his own life. It’s one of those reflective songs that pulls you in and reminds you that you need slow down in this fast-paced life. The song is a very relaxing listen. “Mississippi Moon” is a song title that upon first listen might make you think of bro country, but I assure there’s no bro country here. At the same time this heartbreak song doesn’t stand out that well lyrically compared to the other heartbreak songs on this album.

Baird sings of his own mortality on “When I Go.” The somber, yet definitive reflection in his voice as he thinks of his mistakes and what lies ahead for him really resonates with you. It’s one of the lyrical high points on this album for sure, as the emotion of it really makes it stand out. While Baird does a great job with the faster paced, more fun songs, it’s these softer songs where you can really feel his talent shine the brightest. Wrong Side of the River ends with “Cowboy Cliché.” Baird is preparing himself for the impending breakup coming his way and wants it come so he can start living the clichéd cowboy lifestyle. He knows he will drift around and live with the skeletons that haunt him in his closet. It’s yet another solid heartbreak tune on an album full of them.

Overall Wrong Side of the River is a pretty good album with some impressive instrumentation. This is the absolute best part of the album, as I really don’t have any complaints in this regards. It’s catchy, it’s fun, it sets the tone perfectly on the sadder songs and it’s very country. Rob Baird’s voice really impresses me on this album too. It’s very smooth and emotive. The comparison I instantly thought of was Wade Bowen, which I know is high praise, but Baird is most certainly worthy. If I were Baird I would stick around Austin because I think he would fit in well next to the likes of Bowen and other Red Dirt artists. The only thing this album needed that it lacked was a few more “wow” moments. Other than that I think it’s a great album and I’m excited to hear what Baird has in-store next. He certainly shows a ton of potential with Wrong Side of the River.