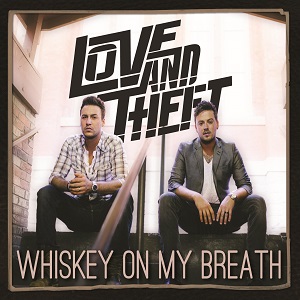 The story of country music group Love and Theft is certainly interesting. They originally started out as a trio made up of Brian Bandas, Stephen Barker Liles and Eric Gunderson. They got their break into country music via the writing of Liles and caught people’s attentions with their pop country flavor. After two top 25 songs under Carolwood/Lyric Street Records, it shut down in April 2010 and left the group without a label. In 2011 Bandas left Love and Theft, making the trio a duo. Liles and Gunderson then signed with RCA Nashville, where they landed their first #1 hit, “Angel Eyes.” Their three follow-up singles flopped however and in October 2014 they parted way with Sony Music Nashville. They’re now with the independent label Hate & Purchase Music. They’ve released their first album under Hate & Purchase, Whiskey On My Breath. The first single from this album has impressed me, so let’s see if the album can follow suit.

The album starts off with “Can’t Wait for the Weekend,” which begins well enough with some acoustic guitar play. When the song itself begins is when it takes a wrong turn. It’s a boring, clichéd party song about weekend warriors. There’s nothing offensively bad about it, but it bores me to tears with its bland lyrics and vocals. The boring clichés continue with “Anytime, Anywhere.” The premise of the song is a guy willing to kiss his girl anytime, anywhere. Call it bro country, call it checklist country, call it whatever you want to, but you’ve heard this song hundreds of times already. This song is the antithesis to creativity. It’s more of the same again with “Hang out Hungover.” There are more clichéd lyrics and another song about a man trying to have sex with a woman. Nothing to see hear. This is another uncreative song appealing to radio.

Next is the album’s title track, which was the lead single and as I said above what colored me interested in this album in the first place. Up until this song, Love and Theft had yet to impress with a song because they just sang vapid pop country songs. This is a song of substance that deals with meeting Jesus and answering for your sins, but the man in the song doesn’t want to meet him with whiskey on his breath. The lyrics are well written, the song is decidedly country and it’s easily the best song Love and Theft has ever put out. They follow this up with another strong song, “Easy.” Love and Theft sing about how easy it is to love someone who captures your heart. While the lyrics are a little cheesy and checklist-y at times, they work for the most part. What really sells this song to me is the harmonies, which is part of what made “Whiskey on My Breath” such a great song. This is a pop country with a simple theme that makes for a solid song.

Based on the title of “Tan Lines,” I came into this song expecting the worst. Does it live up to this expectation? Yes it does. Within the first five seconds of the song you know this is not going to be good because of the reggae, beach beat you’ve heard in beach country songs before. The song is about getting drunk on a beach and finding girls with tan lines. While it might seem harmlessly fun at first, the chorus of this song will annoy you more every time you hear it. It’s easily the worst song on this entire album. I predict this will be a hit single and it will haunt us in the summer of 2015. I really hope I’m wrong though.

“Everybody Drives Drunk” is another song that when I saw the title of it, I expected a terrible, inappropriate party song. Fortunately, I’m very wrong. This is a song about how people are all under the influences of some past heartbreak or unfortunate event in their lives, meaning that we’re all going through life driving drunk. In other words, we’ve all been hurt and we are all influenced by our past. So the title “Everybody Drives Drunk” is actually quite clever and creative. This song sounds like it came right out of the 90s too. It’s a great song, although I find it bizarre that it follows “Tan Lines.” Love and Theft go back to being radio-friendly unfortunately on “Can’t Stop Smiling.” This song could have been good, but the lyrics are just too clichéd and unimaginative. I’m also getting a boy-band like vibe from the song. I will say one thing this song gets right is the mandolin, so at least the song sounds mostly country. That saves the song from being completely not memorable.

The next song is “Wrong Baby Wrong” and wait a minute…this song sounds familiar. That’s because this was a top 15 song by Martina McBride in 2010. I’m sure most of you will instantly remember this one. One of the writers of this song is Stephen Barker Liles, who is one half of Love and Theft. The other writers are Brad and Brett Warren (The Warren Brothers) and Robert Ellis Orrall. So it makes sense Love and Theft would be covering this song. Compared to Martina’s version, their version is more stripped down and bluesy, as it has a nice dose of harmonica play. While this version isn’t as powerfully vocally, it’s better instrumentally and production wise.

The album continues its schizophrenic behavior with “Like I Feel It.” What I said for “Can’t Stop Smiling” above, you can say the same for this song. The lyrics are bad, but the instrumentation is actually good. The vocals are very average at times and at other times cringe worthy, especially in the bridge where they add an echo effect to their voices. Why artists are compelled to add this to their songs is beyond me. The album ends with the party song, “Get Drunk and Make Friends.” While this will make you roll your eyes, let me expound upon this. It’s actually a country party song. The main instrumentation in this song is the piano and harmonica. The lyrics aren’t offensive and are actually kind of fun. This is a country party song done right and reminds me of the feel good country songs of the past. So it’s a great way to end the album.

I have no idea what the hell I just listened to, as Whiskey On My Breath was literally all over the place. There are times on this album where I roll my eyes and cringe, while there are other moments where I applaud the creativity and instrumentation. A psychologist would say Love and Theft is experiencing an identity problem, as they have no idea what they want to be with this album. There’s really a song on it for everyone, which I guess is okay. But for an album as a whole it sends mixed messages. So with that being said I would recommend listening to “Whiskey on My Breath,” “Easy,” “Everybody Drives Drunk,” “Wrong Baby Wrong” and “Get Drunk and Make Friends.” If you like vapid party songs, check out the rest. I give a half-recommendation, half-condemnation. Love and Theft’s Whiskey On My Breath isn’t among the best, nor worst country albums you’ll hear in 2015.