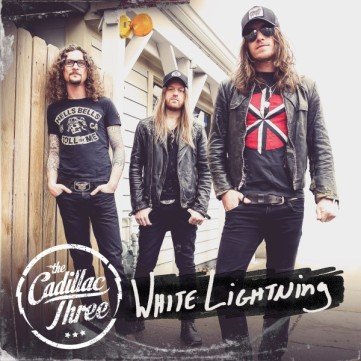 When it comes to American country rock/southern rock trio, The Cadillac Three, I’ve really never formed a solid opinion on them. They certainly exhibit a penchant for rock driven country songs and I can tell they have potential to produce good music. There’s a reason Scott Borchetta signed them to Big Machine Records. So far though the two singles they released previously haven’t showcased the band’s talents. The first single released in 2013 was “The South” which featured guests Dierks Bentley, Florida Georgia Line and Mike Eli of The Eli Young Band. It was a hodgepodge of a song that really didn’t stand out to me. The other single they released last year and it was called “Party Like You.” In Derek’s review of it last year, he summed the single up perfectly, saying it had “shallow, generic lyrics over great instrumentation.” This has summed up the career of The Cadillac Three so far for me. So they just released their third single, “White Lightning,” and they now have another chance to sway my mind. Does the trio of Jaren Johnston, Kelby Ray and Neil Mason impress me this time?

Well….it’s an improvement I guess. The instrumentation is once again pretty good, as they stick to their rock country sound. It’s their sound and they know how to do it. The guitar play in the bridge is solid and I wish this could have been highlighted more in the song. As for the lyrics, they’re pretty basic once again. I’ll say this: at least they aren’t generic party lyrics like last time. Instead they’re just a bunch of clichés about the south repeated over and over. The song starts out with the following line, “she stole my heart.” Okay, so it’s a love song. Now let’s hear about the actual relationship. That should be the natural progression in this type of song, no? Instead we get four lines about clichés from the south that start out each line with “Faster than…” Then the line “Ooh, I saw white lightning” is repeated twice. This is followed by four more clichés. Then the white lightning line again is repeated twice, followed by four more cliché lines. The white lightning line is repeated twice again This is followed by some garbled lines about love and a cliché about moonshine. Then once more the white lightning line is repeated. That’s the song. That’s it. If you don’t believe me, take a look. For crying out loud, can you get any more bare bones songwriting than this? This song says absolutely nothing. It can’t even suck because there isn’t even enough lines to it for it to suck. All they did was insert twelve southern clichés after the phrase “Faster than…” It’s Mad Libs songwriting! Just fill in the blank and you have a song. How am I supposed to connect with this song? Why should I even care about it? It gives me no reasons whatsoever to listen to it.

Elevator music is more interesting than “White Lightning.” I only say this is an improvement over the previous single “Party Like You” because this song is barely anything at all, whereas “Party Like You” was another annoying bro country, party song. I don’t think you could possibly concoct a safer song than “White Lightning.” It’s boring, vanilla and takes absolutely no chances in terms of the lyrics, vocals or instrumentation. I thought A Thousand Horses’ “Smoke” was average, but this song makes it sound exciting. If you want the real “White Lightning,” click here and listen to George Jones show you how it’s done. The Cadillac Three’s “White Lightning” is lazy, formulaic songwriting at it’s finest. I don’t even have a thought on whether to recommend it or not. I’m going to go listen to something that’s interesting, so I can wake myself up after this song nearly made me fall into a nap.